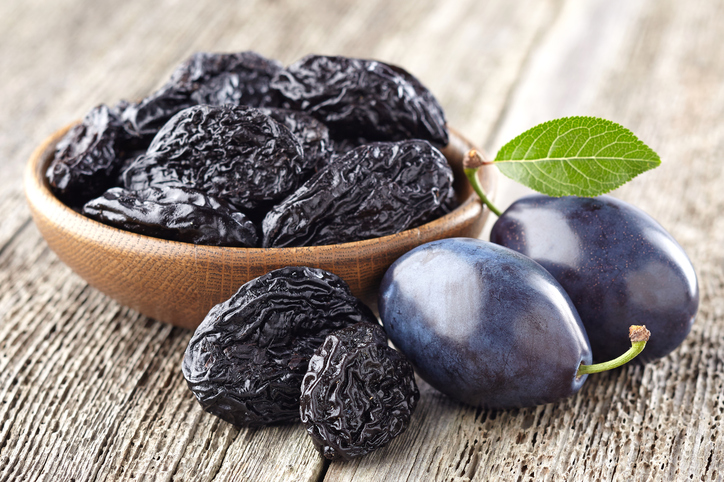 You might already know that a prune is a dried plum. But did you know that prune is also a verb? It means ‘to remove extra or unwanted twigs, branches, stems or roots from a plant’ or, when we are talking about the unwanted parts, ‘to chop off.’ and, figuratively, ‘to remove anything that is unnecessary or unwanted.’

Because prunes are very wrinkled, often people with lots of wrinkles are compared to prunes. Likewise, when your fingers wrinkle after being in the water too long, they also prune. Listen to Frank Crumit singing “The Prune Song” here:

Prune also used to mean the same as preen, but that meaning has now fallen out of use.

Prunes may be a humble variety of dried fruit, but the local Agen prunes are much celebrated in the Lot-et-Garonne department of France. There is even a prune museum in Lafitte sur Lot. You can read more about the production of Agen prunes here, where there is even advice on how to prune a plum tree so that you get lots of plums to dry and make into prunes.

Prune, as a noun meaning ‘a dried plum,’ dates back to the early to mid-14th century. In Late Middle English, prune could actually mean ‘a fresh plum’ as well as ‘a dried plum.’ It came into English from the Old French pronne (plum), and can be traced back to the Vulgar Latin pruna, the singular feminine form that derived from pruna, the Latin plural form of prunum (plum). Prunum came into Latin from the Greek proumnon, which was borrowed from a language from Asia Minor. Prune has been used as slang to refer to old people (especially women) or disagreeable people since the late 19th century, and the related verb prune, meaning ‘to wrinkle,’ is also from the late 19th century. The verb prune, meaning ‘to cut back branches, leaves or roots from a plant’ or simply ‘to chop off’ something unwanted, dates back to the early 15th century. The Late Middle English verb prouynen also came from the French, in this case the Middle French proignier (to cut back vines), but its origin before then is uncertain. Some linguists believe it emerged as a variation of the Old French word provain (scion or later of vine), from the Latin propago, making it related to English words like propagate and prop. Others think it came from a Gallo-French construction, pro-retundare (cut in a rounded shape), from the Latin pro- (forth) and rotundus (round), making it related to the English adjective round. Finally, some think it is identical to the Middle English verb proinen or proynen, a falconry term meaning ‘to preen‘ (feathers), which is why it was, in the past, used as a synonym of preen.

See full definition
Learn more about prune in our forums

Prune in other languages