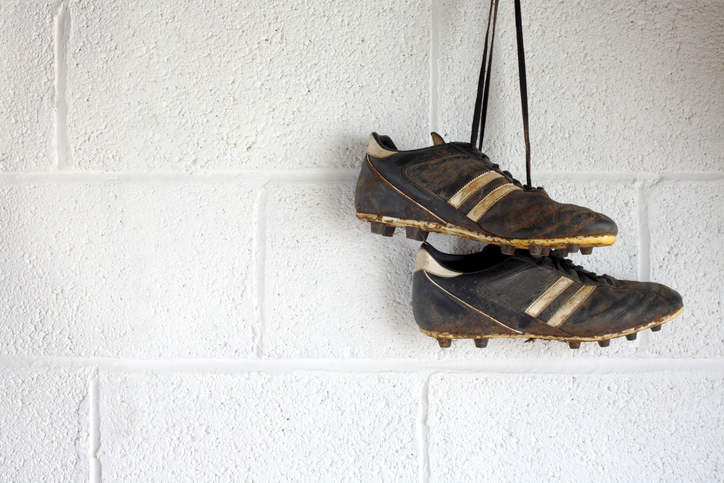 A stud is a head of a nail or part of something that sticks out from a surface, especially as an ornament. It is also a buttonlike object mounted on a pin and used to fasten a piece of clothing or earrings consisting of a small, buttonlike ornament mounted on a metal post. In construction, a stud is a slender piece of wood or steel that forms part of the frame of a wall. As a verb, to stud means ‘to set with or as if with studs.’ Additionally, a stud is a male animal kept for breeding and, figuratively, a very attractive man can be called a stud. As an adjective, it refers to anything related to animal breeding.

Studs was the title of a 1990s US dating show. You can see a clip from the show here:

In UK English, studs are also the hard projections on the bottom of some sports shoes, especially those used for playing soccer or rugby. In US English these are called cleats (which you can also use in UK English, although it is less common than studs).

Stud poker is any of several types of poker where players are dealt a mixture of face-down and face-up cards. You can read more about stud poker here.

Stud, meaning ‘the head of something that sticks out from the surface,’ dates back to before the year 900. The Old English noun studu originally meant ‘a pillar, post or prop.’ By Middle English, the noun stude, in addition to changing its spelling, had shifted slightly in meaning to ‘knob or post,’ which is why some linguists actually say that stud dates back to the late 13th century, and can be traced back to the Old English studu. Either way we look at it, stud can be traced back to the Proto-Germanic root stud– and the Proto-Indo-European root stu-, a variant of sta- (‘to stand’ or ‘to make or be firm’). It is related to the Old Norse stoð or stoth, (a staff, stick or post), the Middle High German stud (stud), and the Old English stow (place), which is still used as a verb in modern English to mean ‘store,’ as well as many other English words, including assist, arrest, consist, contrast, cost, distance, ecstasy  post, press, stable, stall, stand, statue, steer, stem, stay and understand. The main sense of stud expanded in late Middle English (around the 14th century) to ‘decorative devices set in and protruding from a surface.’ The meaning ‘small beam that is part of the frame of a wall’ had been used since Old English. The verb, meaning ‘to set with studs,’ comes from the noun and dates back to the late 15th century. Stud, as a noun meaning ‘a horse used for breeding,’ also dates back to before the year 900. The Old English stōd originally meant ‘a herd of horses’ as well as ‘a place where horses are kept,’ and can be traced back to the Proto-Indo-European root sta-, so it is distantly related to the other stud, as well as the Middle Low German stod (herd of horses), the Old High German stuot (herd of horses), the German Stute (mare), the Old Church Slavonic stado (herd) and the Lithuanian stodas (herd of horses). The sense ‘male horse kept for breeding’ is relatively new; it only appeared in the early 19th century (well after the word had become rare, as its other senses had been replaced with different words). It has been used figuratively to describe ‘a highly sexually active man’ since the late 19th century, and this use expanded to ‘any handsome young man’ in the 1920s.

See full definition
Learn more about stud in our forums

Stud in other languages