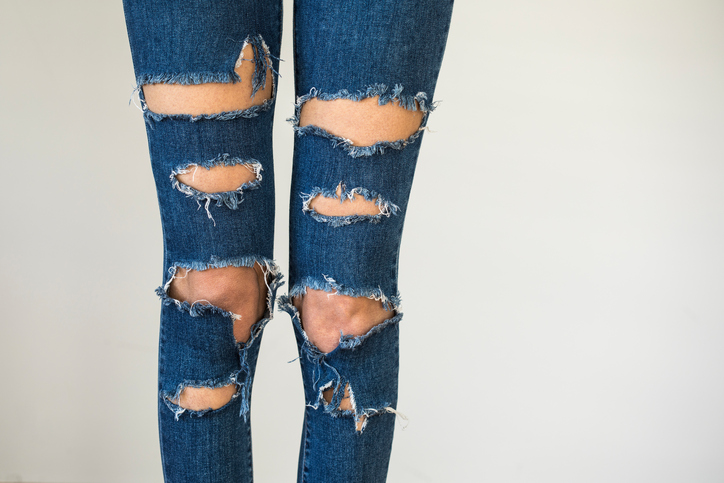 To rip means ‘to tear apart roughly,’ ‘to cut or tear away,’ also roughly, and ‘to become split open or torn,’ as fabric can do. Rip is also used to talk about vehicles, often followed by along, and it means ‘to move at great speed.’ As a noun, a rip is tear made by ripping. Informally, and now dated, a rip is something of little value and a person can also be called a rip if he or she is considered worthless.

rip into: to attack someone verbally or, sometimes, physically. Example: “All I said was that Sheila should maybe lose a little weight, and she really ripped into me!”

rip off: to overcharge or cheat. Example: “You paid $2,000 for that old car? The salesman has ripped you off!”

let rip: to speak or write violently, rapidly, or at great length. Example: “Furious at the state of the sidewalk in his street, Mr. Walker let rip in a strongly worded letter to the local authorities.”

A slightly different meaning of rip off is to take something, like someone else’s idea or creative work, and use it as though it is your own. According to this clip, it’s something that Disney often does:

Rip is also a stretch of turbulent water at sea or in a river.

RIP or R.I.P. is an initialism for rest in peace (or: requiescat in pace, in Latin). You might see it on gravestones or, in more recent times, on social media if someone has died.

Rip, meaning ‘to tear apart,’ dates back to the early to mid-15th century. Its origin is uncertain. Some linguists think it came into English from a North Sea Germanic language, making it closely related to the Flemish rippen (to strip off) and the Frisian rippe (to tear or rip), while others believe it came from a Scandinavian source, and cite a relation to the Swedish reppa and Danish rippe (to tear or rip). Either way, the verb can be traced back to the Proto-Germanic rupjan, from the Proto-Indo-European root reup– or reub– meaning ‘to snatch,’ (so all of the words mentioned above are inter-related). The sense expanded to include ‘to slash open’ in the mid-16th century, and the sense ‘to move with force’ (based on the figurative image of forceful slashing) dates back to the mid-19th century, and was first used in US slang. The idiom ‘to rip off’ dates back to the early 20th century in US slang, and is a figurative play on ‘to tear away.’ The noun comes from the verb, and has been used since the early 18th century. The meaning ‘rough waters’ also comes from the verb, and was first used in the late 18th century to refer to rough seas. The sense soon expanded to rivers, and that became the most common use. Finally rip, meaning ‘a thing of little value’ dates back to the late 18th century. It is unrelated to the other senses. Rip originally meant ‘a worn out or inferior war horse,’ and was a variation of the slang rep, short for reprobate (a reckless or worthless person).

See full definition
Learn more about rip in our forums

Rip in other languages