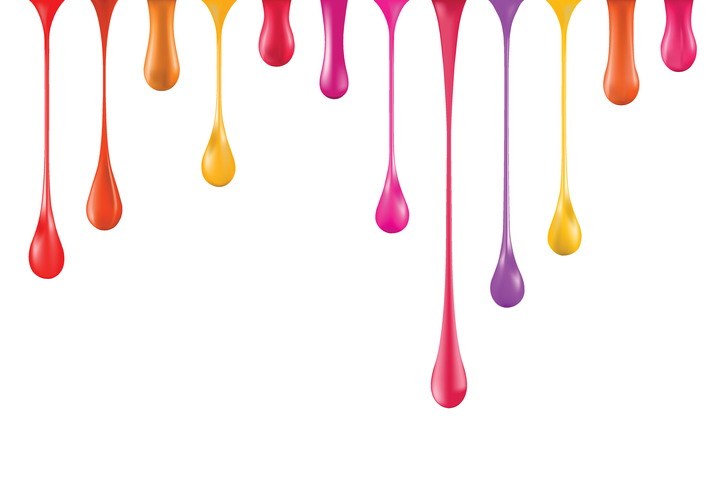 To drip is ‘to let drops fall’ or ‘to fall in drops.’ As a noun, a drip is the act of dripping or a bit of liquid that drips. The sound of drops falling is also a drip. As a slang term, a weak or dull person can be called a drip. In medicine, the continuous and slow introduction of a fluid into the body, usually into a vein, is an intravenous drip, often just called a drip.

drip-feed: to supply something in small amounts. Literally this is used about a device that supplies a liquid drop by drop or about intravenous drips, which drip-feed drugs to patients, but figuratively, you can use it to talk about information or anything else that is provided in small doses instead of all at once. Example: “The factory employees were annoyed by management drip-feeding them information about the proposed changes.”

Listen to The Cure’s song ’10:15 Saturday Night’ here. Drip features a lot in the lyrics.

In naval slang, drip also means ‘to moan or complain.’

Drip dates back to before the year 1000. The Old English verb drypan or dryppan (Middle English drippen or druppen), means ‘to fall in drops or let fall in drops.’ It can be traced back to the Proto-Germanic drupjanan, and though its origin before then is uncertain, most linguists believe it came from the Proto-Indo-European root dhreu– (to fall, flow, drip or droop). Drip is related to the Old Norse dreypa, the Middle Danish drippe, the Dutch druipen, the Old High German troufen and the German triefen (all meaning ‘drip’), as well as English words such as drop, droop, dribble and dreary. The noun comes from the verb, and meaning ‘a drop of liquid,’ dates back to the mid-15th century, in the form of the Middle English drippe. The senses ‘a falling in drops’ and ‘a letting fall in drops’ both appeared in the mid-17th century. The medical sense, ‘a continuous slow introduction of fluids or medicine into the body,’ as well as the slang use of the device that performs this task, dates back to the early 20th century, and the expression drip-feed dates back to around the same time. The colloquial sense ‘stupid, dull or feeble person’ dates back to the 1930s, but it probably comes from an obsolete slang use meaning ‘nonsense,’ which appeared about a decade before.

Intermediate+ Word of the Day: quiz