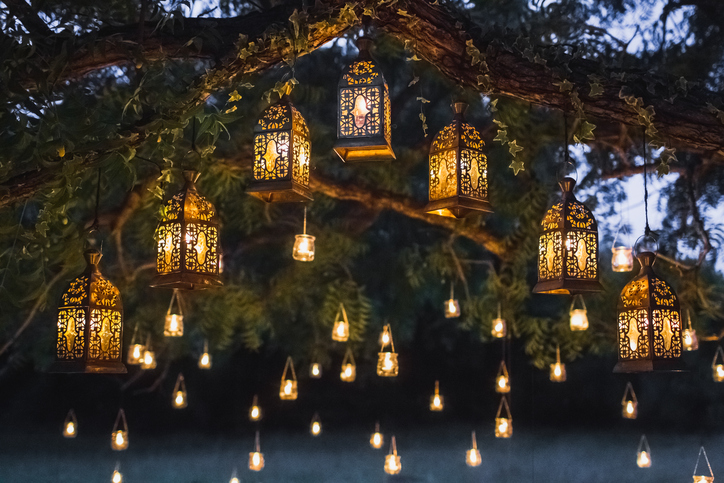 You might already know that a lantern is a portable and transparent case for enclosing a light and protecting it from weather conditions, such as rain or wind. The chamber at the top of a lighthouse, surrounding the light, is also called a lantern.

This weekend is Halloween and you may know that a jack-o’-lantern is a hollowed out pumpkin with a scary face carved on the front and a candle place inside to light it up. Originally, jack-o’-lantern was a word for marsh-fire or strange lights that appear over marshy ground. Marsh-fire is also called will-o’-the-wisp (regular readers may remember this from the word wisp). The names stem from folklore, according to which the strange lights are carried by sprites named Jack or Will, who are trying to lead travelers off the safe paths and into the marshes. You can read more about that meaning of jack-o’-lantern (and will-o’-the-wisp) here, and you can see an example of a Halloween jack-o’-lantern in this scene from the animated movie Scooby-Doo and the Goblin King:

A magic lantern was a device used to project a magnified image onto a wall or other surface. You can read more about magic lanterns here.

If you would like to make a jack-o’-lantern for Halloween, you can learn how to do so here:

You’ll also be looking for something to do with the pumpkin flesh. Why not try this pumpkin cheesecake (as usual, tried and tested by a member of the word of the day team).

Lantern dates back to the mid- to late 13th century, in the form of the Middle English noun lanterne, meaning ‘lamp, lantern or light.’ It came into English from the Old French lanterne, and can be traced back to the Latin lanterna (lantern, lamp or torch), which was altered due to the influence of the Latin lucerna (light), but originally came from the Greek lampter (torch, beacon or fire), from lampein (to shine, give light or be bright). It can ultimately be traced back to the Proto-Indo-European root lap– (to light or burn). Lantern is related to the French lanterne, the Spanish linterna, Italian and Portuguese lanterna, the German Lanterne, and many other European language words with the same meaning. It is also more distantly related to the Greek lampas (a torch, oil-lamp, beacon or light), the Lithuanian lopė (light), the Hittite lappzi (to glow or flash), the Old Irish lassar (a flame), the Welsh llachar (glow), the Spanish lámpara, French lampe, Italian lampada and German Lampe (all meaning ‘lamp’) and the English word lamp. The name jack-o’-lantern was first used in the mid-17th century, to mean ‘night watchman,’ but soon came to be used for the will-o’-the wisp, around the 1670s. Its use as a name for carved pumpkins started in the early 18th century in the US.

See full definition
Learn more about lantern in our forums

Lantern in other languages