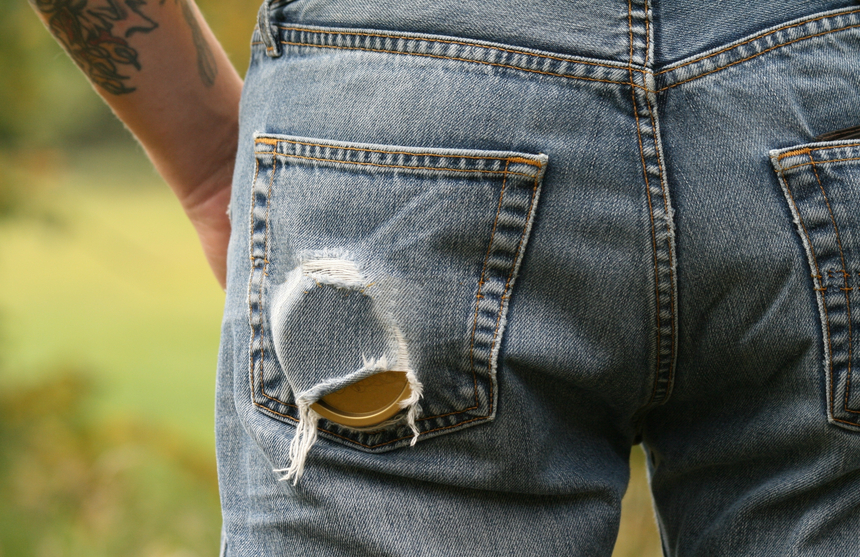 Duff is a colloquial and slang term with many different and unrelated meanings. As a noun, duff is a slang term for ‘the buttocks,’ as pictured above. It is also a stiff flour mixture boiled or steamed in a cloth and flavored with currants and spices (this meaning came about as a variant of the word dough). In US, Scottish, and Irish English, duff is also a term used in ecology and it means ‘organic matter in various stages of decomposition on the floor of the forest.’ As a verb, to duff means ‘to misrepresent or fake something’ and more generally, ‘to cheat someone,’ and although these verb senses are now archaic, they gave us the adjective duff, still used in informal UK English, meaning ‘false’ or ‘of bad quality.’

up the duff (UK, slang): pregnant. Example: “You know Charlene had a baby just a few months ago? Well I heard she’s up the duff again already!”

duff someone up (UK, informal): beat someone up. Example: “The bullies were waiting outside the school gates to duff Robert up when he came out.”

In the cartoon The Simpsons, the beer Homer and his friends drink is called Duff. They now sell Duff beer at Universal Studios, and there are several other Duff beers sold around the world (without permission from creator Matt Groening). In this video, you can watch as Homer goes on a tour of the Duff brewery.

In slang, duff can also refer to a “designated ugly fat friend.” This is obviously quite offensive. The 2015 high school movie The Duff was named for this meaning of the word, though its eponymous character (that means that her name is in the title) is played by an actress who many people would consider neither ugly nor fat, showing that the term is very subjective, especially when it comes to the standards of Hollywood.

Duff has not been around in English for very long. Its different meanings have different origins, and they are mostly unrelated. Duff, as a slang term for buttocks, dates back to the mid-19th century. It originated in Scotland, and could be related to duop, another Scottish word for buttocks. The pudding sense is also from Scotland, and is a dialectal variation of dough. Its use in ecology, meaning ‘plant decomposition on the ground,’ is probably a metaphorical use of the pudding meaning. The verb, meaning ‘to cheat’ may have come from the Scots dialect word duffer, ‘a stupid, dull or deaf person.’ It is a variation of the Scots dauf (dull or deaf), from the 15th century, which comes from the Old Norse daufr (also deaf or dull). This is also the origin of the adjective deaf in English.

See full definition
Learn more about duff in our forums

Duff in other languages