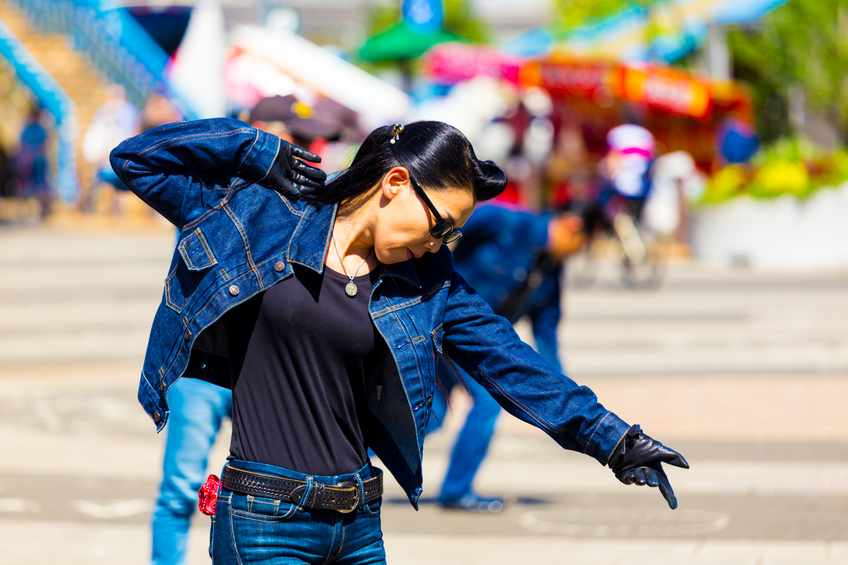 A woman with a slicked-back hairstyle.

Slick is an adjective that means ‘smooth and glossy,’ and also ‘smooth in manners or speech’; this last sense often has a negative connotation, as it implies that the person we’re talking about is not trustworthy. Slick also means ‘slippery,’ with oil or ice, for example, and it also describes something that is well executed but shallow in content. Slick means ‘clever and ingenious’ and, colloquially, ‘great’ or ‘wonderful.’ A slick is a slippery place or the thing that causes that place to be slippery.

oil slick: a spillage of oil floating on the sea or washed up on a beach. Example: “Ecologists are very worried about the oil slick that is rapidly heading toward the coastline.”

The 1991 Billy Crystal comedy City Slickers is about some friends from the city who go on an adventurous cowboy-style trip in the West. In the movie, they participate in a cattle drive, where a group of cows (collectively called cattle) are moved from one state to another.

Slick is also a verb that means ‘to make smooth’ and is especially used in reference to hair. It is often used with the words down or back. Example: “James used some gel to slick down his hair.”

Slick first appeared in Old English before the year 900 as a verb, -slician, meaning ‘to make smooth.’ It comes from the Proto-Indo-European root sleig-, meaning ‘to smooth,’ ‘to glide,’ or ‘to be muddy.’ This root is also the origin of the word slime, and many related Germanic words, like the Dutch sleek, meaning ‘even’ or ‘smooth.’ The adjective appeared in the early 14th century, as the Middle English slike, and the figurative sense for a person who is not trustworthy appeared in the early 17th century. The noun is also from the 17th century, but it was not used to describe a person until the 1950s.

See full definition
Learn more about slick in our forums

Slick in other languages