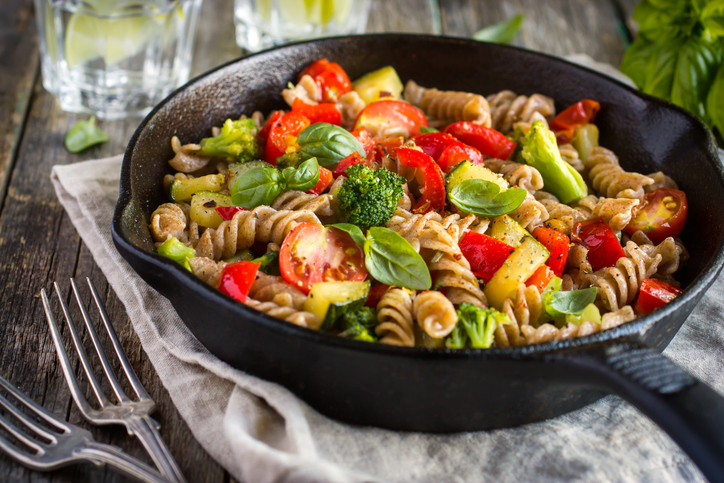 A pan is a metal container, usually shallow, used for cooking things on the stove top or, in US English a shallow metal container for baking (in UK English, these are called “tins”). It is also a dish-shaped container, like you find on kitchen scales or the container in which gold is separated from gravel. As a verb, to pan means ‘to separate gold from gravel’ and informally, ‘to criticize harshly.’ In show business, to pan means ‘to move the camera from side to side following a subject or to keep a wide scene in clear view.’ The related noun refers to the act of moving a camera in such way or the shot obtained by doing so.

pan out: work out well. Example: “Moving abroad was a great idea, but it didn’t exactly pan out. We ran out of money and had to come home.”

You may be familiar with the word pan as part of the name Peter Pan, the boy who never grew up from the book by J. M. Barrie. Here is a clip from the Disney animated movie adaption of the story:

Pan is also used as a prefix meaning ‘including or embracing all elements of something,’ like in the words “pancultural” (embracing all cultures) or “pantheism” (the belief that God is in everything in the universe).

You may hear English speakers talk about pots and pans and maybe you have wondered what the difference is between those two items. Well, technically, a pan has one long handle whereas a pot will normally have two small handles located on either side. Also, pots tend to be deeper and have straighter sides. However, what is not clear is whether a saucepan is a pot or a pan (it has one handle and is called a pan, but its depth suggests it is a pot). In fact, generally, any pot can also be a pan, but some pans, such as frying pans, which are shallow, cannot be pots. In reality though, when English speakers talk about pots and pans, most of the time, we just mean all and any of the vessels we have used to cook the food in!

Pan is also the name of the god of woods, fields, flocks, and shepherds in Greek mythology. He is often depicted with the head and upper body of a man and the legs and sometimes the horns and ears of a goat. He plays pipes made from lengths of hollow reeds—the similar modern-day instruments are known as panpipes because of this.

Pan dates back to before the year 900. The Old English noun panne or ponne, which stabilized as panne by Middle English before becoming pan in Modern English, comes from the Proto-Germanic panna, which in turn, probably came, in the late 4th century, from a borrowing of the Vulgar Latin patna, from the Latin patina (meaning ‘shallow pan, dish or stew pan’), and earlier the Greek patane (plate or dish). It can be traced all the way back to the Proto-Indo-European pet-ano, from the root pete-, ‘to spread.’ It is related to the Old Norse panna, the Old Frisian panne, the Middle Dutch panne, the Dutch pan, the Old Low German panna, the Old High German phanna and the German pfanne. The verb comes from the noun and, meaning ‘to wash gravel or sand in a pan to find gold,’ dates back to the early 19th century. The phrase pan out, meaning ‘to succeed,’ is a figurative play on this verb. The meaning ‘to criticize harshly’ dates back to the early 20th century. Pan, meaning a sideways movement of the camera (and its related verb) is a shortened form of the word panoramic and dates back to the early 20th century. The prefix pan– comes from the Greek prefix pan, meaning ‘all,’ and can be traced back to the Proto-Indo-European root pant– (all).

See full definition
Learn more about pan in our forums

Pan in other languages