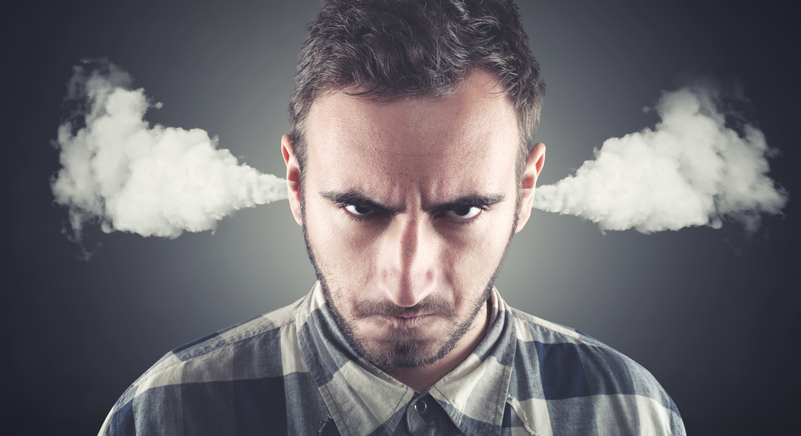 You probably know that rage is a synonym for fury or violent anger, and it is also a fit of such violent anger. A violence of feeling, desire, or appetite, can also be called a rage as can a violent wind, fire, or sea or a virulent disease. Rage can also mean enthusiasm, and the object of such enthusiasm, such as something popular or fashionable, is known as the rage. As a verb, to rage means ‘to act or speak with fury’ and ‘to move or surge furiously.’

all the rage: very popular. Example: “Short hairstyles are all the rage this season.”

Rage Against the Machine is a US rock band who uses their songs to express revolutionary political views. You can hear their song “Sleep Now in the Fire” here:

The related adjective raging means ‘intense,’ and it can be used to talk about pain, emotions, desires, and appetites, as well as about natural forces, such as weather phenomena or fires. Example: “The raging fire destroyed two entire towns.”

You might have heard the expression road rage, which is sometimes used in news reports of incidents where a driver has reacted angrily to something another driver has done, by assaulting the other driver or endangering them through driving in a way likely to make them crash, for example. The expression first started being used in the US in the 1980s and has become increasingly common as incidents of road rage have become more widespread.

Rage dates back to the mid- to late 13th century, The Middle English noun rage could be used to mean ‘madness or insanity,’ ‘anger or wrath,’ ‘a fit of frenzy,’ ‘fierceness in battle,’ or ‘the violence of a storm or a fire.’ It was adopted from raige or rage (passion, rage, fury, madness or spirit), and can be traced back to the Late Latin rabia, from the Latin rabies (madness, rage or fury) and the verb rabere (to be mad or rave), ultimately from the Proto-Indo-European root rebh (violent or impetuous). Rage is related to several Romance language words with the same or similar meanings, such as the Spanish rabia, the Catalan ràbia, the Italian rabbia, the French rage and the Portuguese ravia, as well as the English words rabies and rabid. In the 15th and 16th century, rage was also used as a synonym for rabies. The rage, meaning ‘the fashion,’ dates back to the late 18th century, while all the rage appeared in the mid-19th century. The verb, which originally meant ‘to play or romp’ also dates back to the mid- to late 13th century, in its Middle English form ragen, and comes from the noun. The senses we use today, ‘to be furious,’ ‘to go mad,’ or ‘to speak passionately,’ first appeared around the year 1300. It has been used about things (fire, storms, etc.) since the early 16th century.

See full definition
Learn more about rage in our forums

Rage in other languages