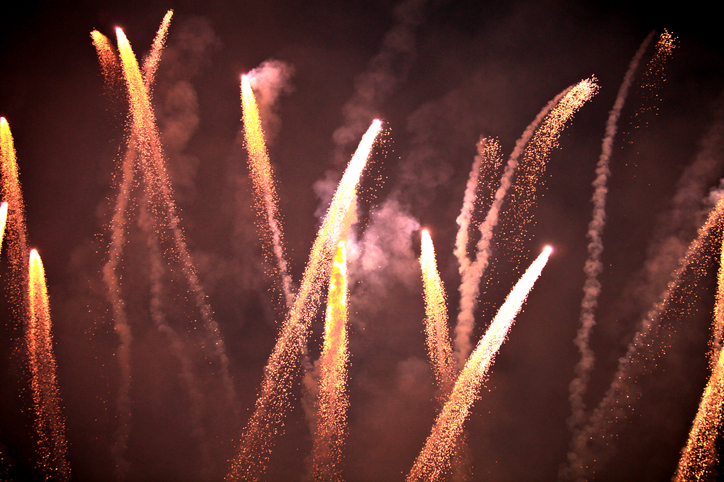 A squib is a small firework, consisting of a tube or ball filled with powder, that burns with a hissing noise terminated usually by a slight explosion, or a firecracker broken in the middle so that it burns with a hissing noise but does not explode. A squib is also a short and witty piece of writing or remark, usually a sarcastic one, although this meaning is now dated. In US English, a squib is a short newspaper story used as a filler, though it has also fallen out of use, and in Australian English, squib is a slang term for a coward. As a verb, squib is uncommon, but it can mean ‘to shoot a squib firework,’ ‘to explode with a small sharp sound,’ ‘to write squibs,’ or in Australia, ‘to behave in a cowardly way.’

damp squib: something that doesn’t live up to expectations. Example: “According to the studio hype, it was supposed to be the best movie of all time, but it turned out to be a damp squib.’

In the Harry Potter books and movies, a squib is someone who is born into a magical family, but who has no magical power of their own. You can learn more about squibs and the difficulties they face in this video:

In American football, a squib (or squib kick) is a short, low kick at kick-off, as well as to kick a ball in this way. Because this type of kick is unexpected, it usually forces the other team to scramble to get the ball as it bounces off the ground, rather than allowing a clean catch by a fast runner, and gives the kicking team some time to arrange their defense.

Squib dates back to the early 16th century, but its origin is completely unknown. Linguists can’t even agree on whether the writing or the firecracker sense came first. If it was the latter, then squib may have originated as an imitation of the sound broken firecrackers make.

See full definition
Learn more about squib in our forums

Squib in other languages