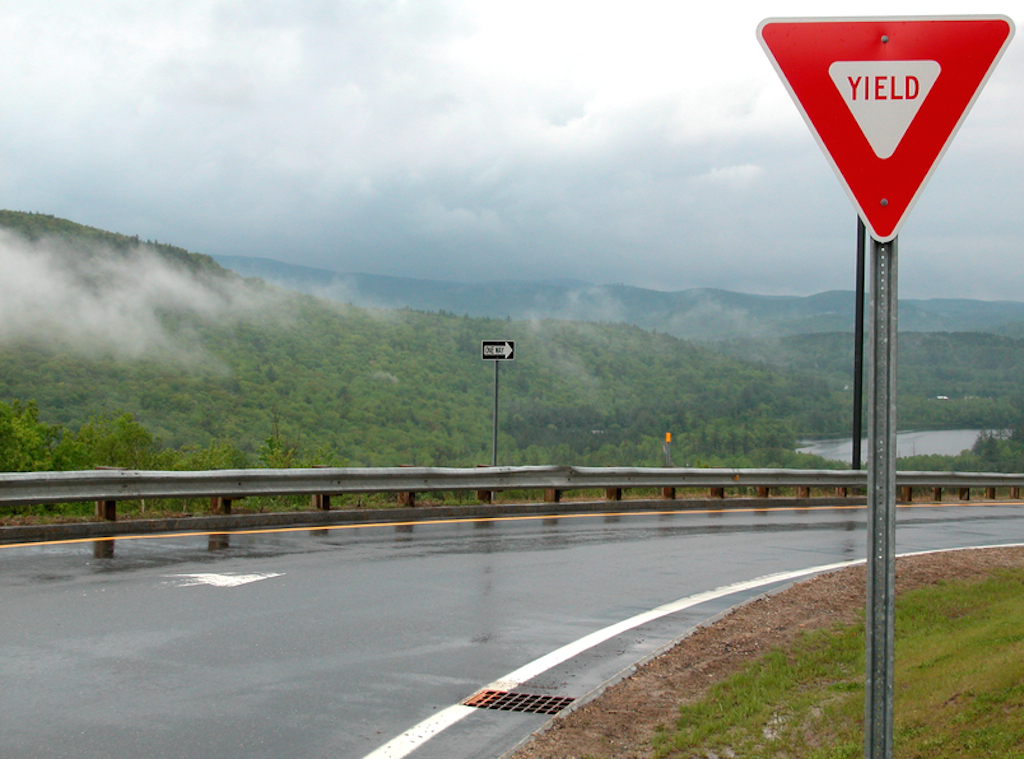 To yield means ‘to surrender to authority,’ ‘to relinquish,’ or ‘to give in to something.’ It also means ‘to give as expected’ and ‘to cause something to happen.’ In agriculture, yield means ‘to produce through a natural process or after cultivation,’ and, in business, ‘to produce profit.’ As a noun, a yield is both the act of producing and the quantity produced. In business, a yield is a profit or the income produced by an investment.

Listen to Bobby Bland with “Yield Not to Temptation” here:

In the US, the yield traffic sign means that other traffic has the right of way (i.e., the right to go first) and you should let other drivers pass. It is different from a stop sign because if no cars are around, you don’t have to stop. In the UK, this is called a give-way sign.

Yield dates back to before the year 900, in the form of the Old English verb gieldan or geldan (Middle English y(i)elden), which meant ‘to pay or pay for,’ ‘to reward,’ ‘to worship or serve’ or even ‘to sacrifice to.’ It can be traced back to the Proto-Germanic geldan (to pay) and the Proto-Indo-European root gheldh– (to pay). Yield is related to the Old Saxon geldan (to be worth), the Old Norse gjaldo (to repay or return), the Middle Dutch ghelden and Dutch gelden (to cost, be worth or concern), the Old High German geltan and German gelten (to be worth), the Gothic fra-gildan (to repay or requite), the Old Church Slavonic žledo and the Lithuanian geliuoti (to be valid or of good effect), as well as the Middle Low German and Middle Dutch gelt, the Dutch geld and the German Geld (all meaning ‘money’). Over time, the senses of the verb shifted significantly, partly because yield was used to translate the Latin reddere and the French rendre (to return, restore, give back, pay or yield), so the meanings we have kept today, are more closely related to these than the original Germanic senses. ‘To be worth’ and ‘to be valid’ both appeared during this period, between the 12th and 13th centuries. The sense ‘to give yourself up or surrender’ was first used around the year 1300, while ‘to give in return for labor or investment’ dates back to the early 14th century. The noun, originally meaning ‘payment or sum or money,’ ‘service or offering’ and ‘worship,’ also dates back to before the year 900, as the Old English noun gield (Middle English yield), and comes from the verb. The sense ‘production’ (as in crops or investment) first appeared in the mid-15th century.

See full definition
Learn more about yield in our forums

Yield in other languages