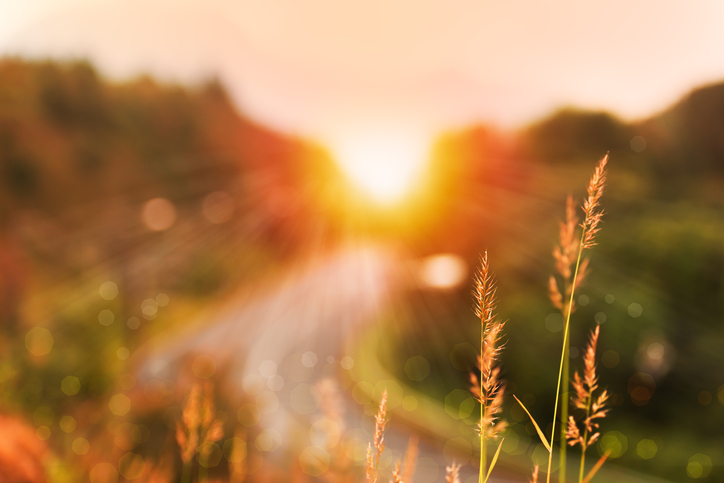 Listen to American band Grizzly Bear singing “While You Wait for the Others” here:

Listen out for the lyric “The perfect glare we all fall through.”

As a noun, glare is only countable in the sense of a fierce or angry look.

The related adjective glaring can be used to describe a bright light or a person who is looking fierce or angry, but it can also mean ‘obvious.’ For example, you might say that someone had made a “glaring error.”

Glare, meaning ‘to shine brightly,’ dates back to the mid- to late 13th century, in the form of the Middle English verb glaren. Linguists are unsure whether it came into English from the Middle Dutch glaren (to gleam), or it is merely related, but either way, it can be traced back to the Proto-Germanic root glaz– and the Proto-Indo-European root ghel– (to shine). Glare is related to the Middle Low German glaren (to gleam), as well as the Sanskrit harih (yellow) and hiranyam (gold), the Old Persian daraniya– (gold), the Greek khloros (greenish-yellow color), the Latin helvus (yellowish), the Old Church Slavonic zlutu, Polish żółty and Russian zeltyj (yellow), the Old Irish glass, Welsh and Breton glas (‘green’ or ‘gray, blue), the German gelb and Old Norse gulr (yellow) and the Gothic gulþ (gold), as well as English words such as choral, chloride, chlorine, chlorophyll, cholera, cholesterol, gall, gild, glad, glance, glass, glaze, gleam, glee, glide, glimmer, glimpse, glint, glisten, glitch, glitter, gloat, gloss, glow, gold, melancholy and yellow. The sense ‘to stare fiercely’ was first used in the late 14th century. The noun, meaning ‘bright light’ or ‘dazzling glitter’ comes from the verb, and dates back to around the year 1400. From the 17th century, it has been particularly used to refer to light reflected off a surface. The sense ‘fierce look’ dates back to the mid-17th century.

See full definition
Learn more about glare in our forums

Glare in other languages

Intermediate+ Word of the Day: tweak