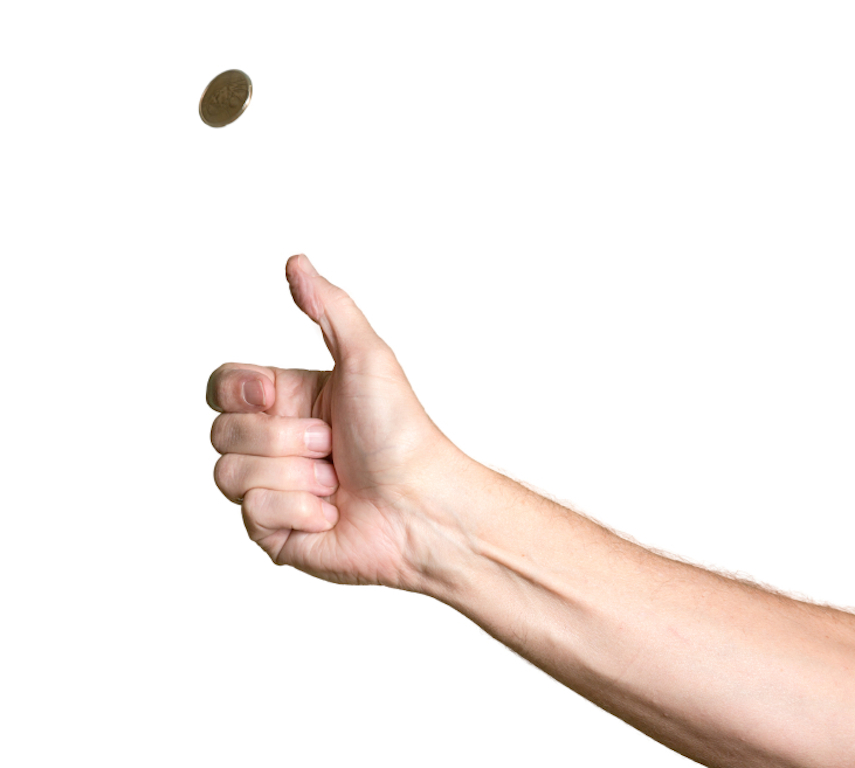 Sometimes, the only way to decide is to toss a coin!

Toss means ‘to throw something carelessly and casually’ or ‘to throw something to someone,’ as in a game. It also means ‘to move irregularly from side to side’ or ‘to move your head suddenly.’ When you toss a coin, you throw it in the air and decide something depending on which side the coin lands on. It also means ‘to mix food lightly’ and is especially used with salads. As a noun, a toss is the act of throwing or a sudden movement of the head.

toss-up: when two possibilities seem equally likely. Example: “These two candidates are both popular; it’s a toss-up which one of them will win.”

argue the toss (UK): dispute something. Example: “I tried to give the new employee some feedback about her work, but she just wanted to argue the toss, rather than accepting it!”

toss something off: do something quickly, without much care. Example: “I only had five minutes, so I quickly tossed an email off to the boss about the proposed changes.”

You can watch a coin being tossed in this scene from the movie No Country for Old Men:

In UK English the slang expression “not give a toss,” meaning ‘not to care at all,’ is quite common. Somebody, might say, for example “I don’t give a toss what anyone thinks; I’m still going to do it!” Most people would consider this term fairly mild. However, its origins are actually quite vulgar, so it is best avoided unless you are sure the person you are speaking to will not be offended!

Toss, meaning ‘to lift of throw something with a sudden movement,’ dates back to the mid-15th century, but its origin is uncertain. Some linguists think it came into English from a Scandinavian source, similar to the dialectal Norwegian tossa (to strew or spread). Others think it may be Celtic, and compare it to the Welsh tosio (to jerk) and tos (a quick jerk), though this theory has fallen out of favor in recent years. The intransitive sense, to move irregularly from side to side,’ was first used in the mid-16th century. The meaning ‘to mix food lightly,’ usually referring to salads, first appeared in the early 18th century The noun, meaning ‘the act of throwing,’ dates back to the early 17th century, and comes from the verb. The sense ‘a coin toss’ was first used in the late 18th century.

See full definition
Learn more about toss in our forums

Toss in other languages