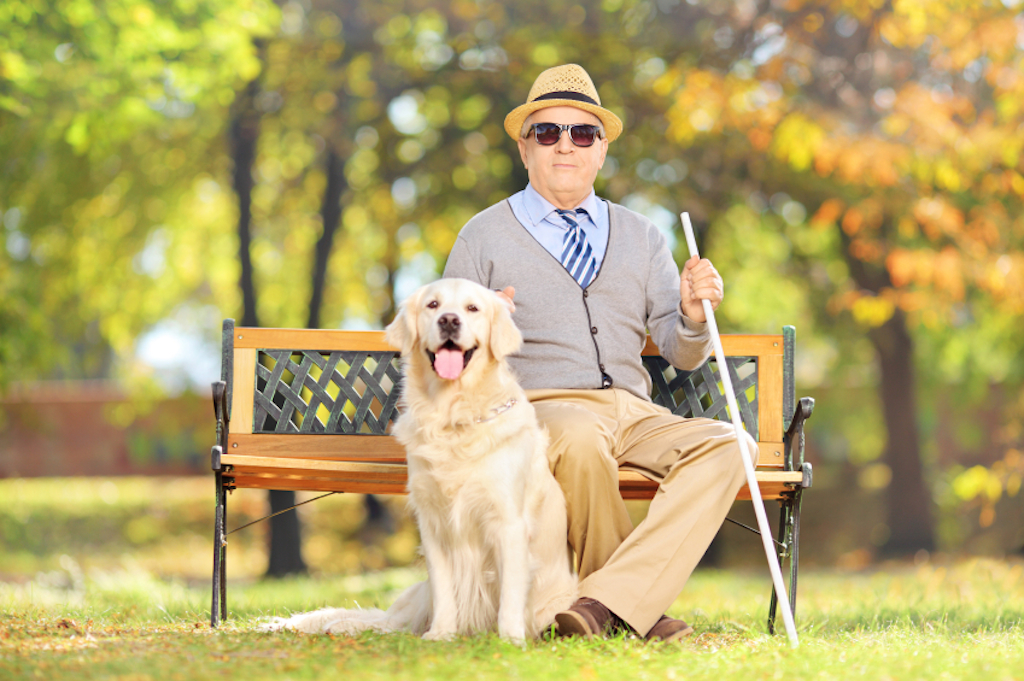 Blind people sometimes have guide dogs to help them get around.

blind as a bat: having very poor eyesight. Example: “I used to have great eyesight when I was young, but now that I’m getting older, I’m as blind as a bat without my glasses!”

blind spot: literally a spot you can’t see in your mirrors when driving–you should always check your blind spot before you pull out to pass someone–and, figuratively, something you cannot or do not want to see. Example: “Julie has a real blind spot when it comes to her son; she lets him get away with anything!”

In the 1992 movie Scent of a Woman, Al Pacino plays a blind retired army officer. You can see the movie trailer here:

Blind is also a noun. A blind is a cover for a window that can be raised or lowered, allowing us to regulate the amount of sunlight that comes in through the window. We often use the plural form, blinds. They are sometimes made of slats of wood or other material, where the width between the slats can be adjusted too. Example: “I always close the blinds at night so my neighbors can’t see inside my house.”

The expression blind drunk does not mean that someone has actually lost their sight through drinking alcohol, but just that the person is so drunk that they are not really aware of what is happening.

Blind dates back to before the year 1000, as the Old English adjective blind (its spelling has not changed), which meant ‘without sight’ as well as ‘dark, obscure or covered in darkness,’ and ‘unintelligent or lacking mental perception.’ It can be traced back to the Proto-Germanic blindaz (blind), possibly from a Germanic word related to the idea of ‘to deceive or make cloudy,’ from the Proto-Indo-European root bhel– (to shine, flash or burn). Blind is related to the Old Frisian, Old Saxon, Dutch and German blind, the Old Norse blindr and the Gothic blinds (all meaning ‘blind’), and more distantly related to English words such as black, blank, blanket, bleach, blend, blond, blue, blush, flame and flamingo. Some linguists have suggested that the original sense was not ‘sightless,’ but rather ‘confused,’ though there is not enough evidence to say for sure. The sense ‘not directed or controlled by reason’ has been used since Old English, while ‘without opening for light or to see through’ first appeared around the year 1600, and ‘closed at one end’ (like a blind alley) dates back to the early 17th century. The colloquial sense ‘to act without investigating first’ dates back to the mid-19th century. The verb, meaning ‘to make blind or deprive of sight,’ dates back to the early 13th century, as the Middle English blendan, and comes from the adjective. It can be traced back to the Proto-Germanic blandjan, from the same source as the adjective. It is related to the Old Frisian blinda, the Dutch blinden and the Old High German blinden (to become blind), and to the Danish blinde and the Gothic gablindjan (to make blind). The noun, which originally meant ‘a blind person’ or ‘blind people collectively’ dates back to around the year 1000, and comes from the adjective. The sense ‘anything that obstructs light’ first appeared in the early 18th century.

See full definition
Learn more about blind in our forums

Blind in other languages