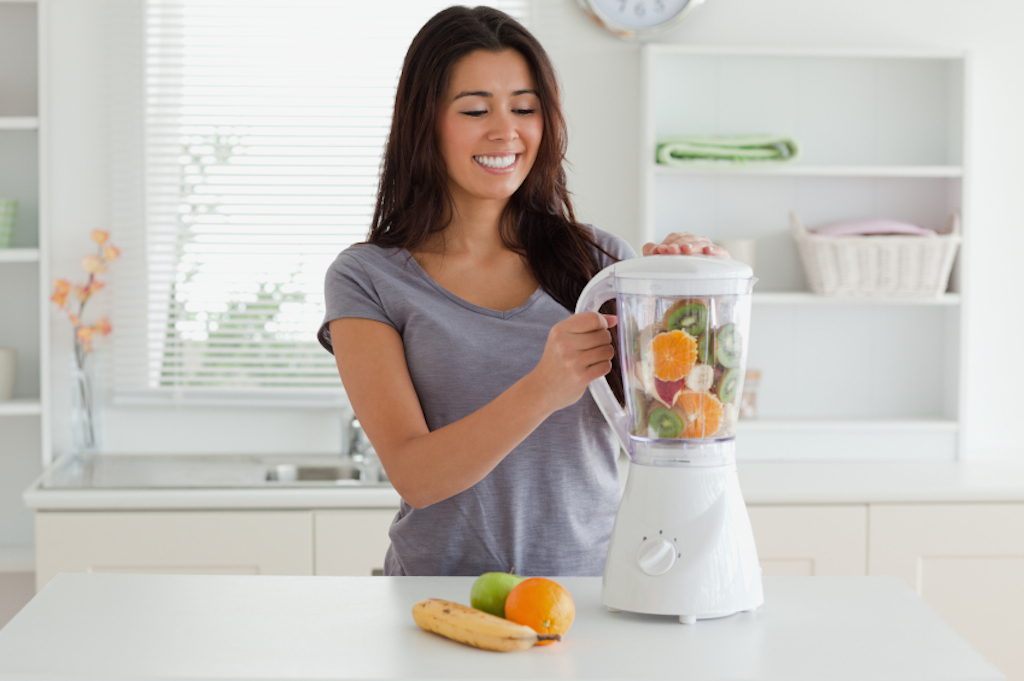 A woman using a blender

To blend means ‘to mix two or more things smoothly‘ or ‘to combine in a really nice way.’ It also means ‘to have no separation that can be easily seen.’ As a noun, you might have heard the word blend in wines or teas; this is because blend means ‘a mixture produced by blending.’

A blended family is one where the parents have children from previous relationships. The movie Blended is about the beginnings of such a family, and you can watch the trailer for it here:

In linguistics, a blend is a word made up of a combination of two words, like brunch, which is made up of breakfast and lunch. Words like this are also called portmanteau words.

A blender is a common kitchen appliance. It is the tall, motorized machine that you can use to make juice, smoothies, milkshakes, etc. There is also a similar appliance called a stick blender, or immersion blender, which has a similar effect but is much smaller and can be held in the hand and immersed, or put, into the thing you are blending.

Blend, meaning ‘to mix something until the parts become indistinguishable’ or ‘to stir a liquid,’ dates back to around the year 1300, in the form of the Middle English verb blenden. Its origin is uncertain. Some linguists think that it evolved from the Old English blendan or blondan (to mix), while others think it came into English from the (related) Old Norse blanda (to mix). It’s possible that it evolved as a combination of both. Either way, blend can be traced back to the Proto-Germanic blandan (‘to mix,’ literally ‘to make cloudy’) and the Proto-Indo-European root bhel– (to shine, flash or burn), and is related to the Old Saxon and Old High German blantan (to mix), the Middle Dutch blanden (to mix), the Gothic blandan (to mix), the Old Church Slavonic blesti (to go astray), the German Blendling (bastard or mongrel) and the Danish blande (to mix), as well as the Sanskrit bhrajate (shines), the Greek phlegein (to burn), the Latin flamma (flame), fulmen (lightning) and fulgere (to shine or flash), the Lithuanian balnas (pale) and blandus (troubled, stupid or thick), and English words such as black, blanch, blanket, blaze, bleach, bleak, blind, blond, blue, blushflagrant, flame and flamingo. The figurative sense, ‘to mingle closely,’ first appeared in the early 14th century. The noun, meaning ‘a mixture formed by blending,’ comes from the verb, and dates back to the mid-19th century.

See full definition
Learn more about blend in our forums

Blend in other languages