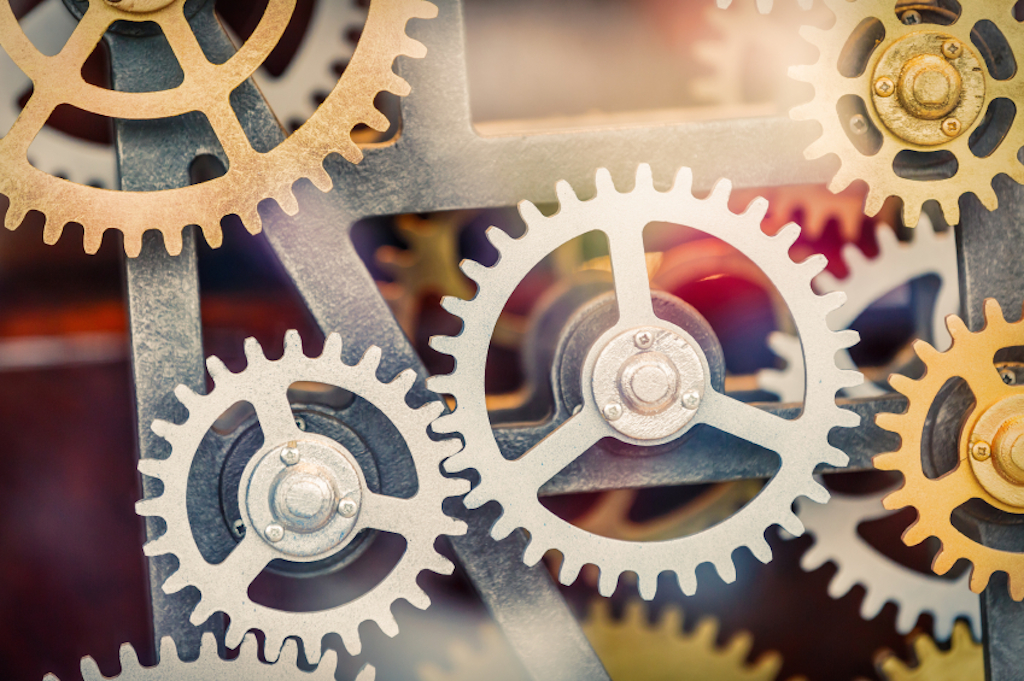 A gear is a wheel or disk with teeth that fit exactly into the teeth of another wheel, in order to modify the speed or direction of a mechanism, such as those found in engines and clocks. It is also the thing that is assembled with all those parts, such as the gears of a car. In addition, gear is any apparatus or material used for a purpose, and informally, it can mean either ‘belongings’ or ‘clothes.’ As a verb, gear means ‘to provide with gears’ and, informally, ‘to adjust something to a situation in order to get a good result.’

in gear: with the gears properly connected. Example: “You need to put the car in gear, before you can drive anywhere.” In gear is also used figuratively to say that something is working properly. Example: “Sorry, I didn’t understand what you meant; my brain isn’t in gear today!”

out of gear: with the gears not connected. Example: “Germaine pressed down on the accelerator, but the car was out of gear, so it didn’t move.”

gear up: get ready for something. Example: “Everyone’s getting geared up to go to Pietro’s wedding at the end of the month.”

shift or switch gears: to change the way you are doing or thinking about something. Example: “This project doesn’t seem to be working; I think we need to shift gears.”

Listen to the Beach Boys with “Little Honda” here. You will hear the word gear several times in the lyrics.

As a slang term, gear can also mean illegal drugs. Example: “Bill went to see his dealer to buy some gear.”

Gear dates back to the late 12th century. The Middle English noun gere originally meant ‘equipment for fighting, armor and weapons.’ It came into English from the old Norse noun gørvi (apparel or gear), which is related to the adjective görr, gørr or gerr (‘skilled or accomplished’ as well as ‘ready or willing’) and the verb gøra or gørva (‘to make or build’ or ‘to prepare or set in order’), all from the Proto-Germanic garjwan (to make, prepare or equip), though its origin before then is uncertain. Gear was also probably influenced by the Old English noun gearwe (clothing, equipment or ornament), from the same Proto-Germanic source. It is related to the Old Saxon garwei and Dutch gaar (done or dressed), the Old High German garo (ready, prepared or complete), garawi (clothing or dress) and garawen (to make ready), the German gerben (to tan) and the English word garb. The senses ‘clothes, dress or wearing apparel’ and ‘harness or equipment for riding a horse’ both date back to the early 14th century, and the meaning expanded to ‘tools, utensils or equipment in general’ (especially for a specific activity) by the late 14th century. The sense ‘toothed wheel in machinery’ was first used in the early 16th century, and the more specific ‘parts by which a motor modifies speed, direction or motion’ appeared in the early 19th century. It was applied specifically to vehicles like bicycles or cars in the late 19th century. The verb, meaning ‘to equip yourself to fight’ or, more generally, ‘to dress,’ also dates back to the late 12th century. It probably evolved from the noun, but some linguists think it came directly from the Old Norse verb gøra or gørva. The mechanical sense, ‘to put machinery in motion,’ dates back to the mid-19th century, and led to the figurative sense ‘to set in motion or adjust something to get good results’ in the late 19th century.

See full definition
Learn more about gear in our forums

Gear in other languages