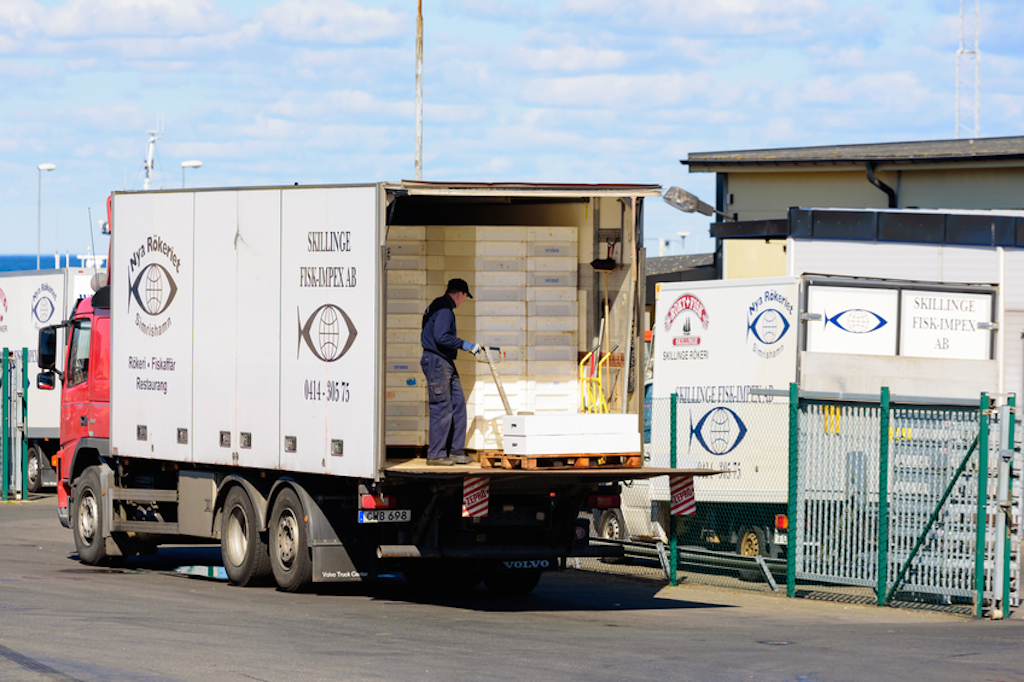 A man loading crates of fish into a truck

A load is anything that needs to be carried from one place to another, and it is also the quantity that can be carried at one time. This is usually used in combination with another noun. A load is also the amount of work that someone has to do and a thing that burdens or oppresses someone. As a verb, to load means ‘to fill or put a load on or in something’ or, usually with down ‘to excessively supply something or someone.’ To load also means ‘to burden or oppress.’

get a load of something (informal): look at something. Example: “Would you get a load of that? That guy is wearing his underpants on his head!”

Loads, always in the plural, is also an adverb that means very much. Example: “I love you loads.” You can also use loads or a load to mean ‘many’ or ‘a large amount.’ Example: “There are loads of advantages to living in the countryside.”

The related adjective loaded is an informal way of saying someone is very, very rich. Example: “Wow, look at that house! Whoever lives there must be absolutely loaded!”

The popular acronym lol or LOL is sometimes mistakenly used to mean ‘lots of love’ or ‘loads of love.’ However, the acronym actually means ‘laughing out loud,’ so if someone writes lol in a message to you, and you don’t see anything funny, they may be misusing it.

Load dates back to before the year 1000. The Old English noun lād originally meant ‘a way or course,’ ‘a carrying,’ ‘a street or watercourse’ or even ‘maintenance or support.’ It can be traced back to the Proto-Germanic laitho and the Proto-Indo-European root leit– (to go forth). Load is related to the Old High German leita, the German leite and the Old Norse leið or leith (all meaning ‘way, road or course), the Old Saxon lithan and Old Norse liða or litha (to go), the Old High German ga-lidan (to travel) and the Gothic ga-leiþan or ga-leithan (to go), as well as the English verb lead and its related noun. The sense of the word evolved, so that by the year 1200, the Middle English noun lode meant ‘a burden’ or ‘something laid upon a person or beast.’ As its senses expanded, lode took on the meanings of the Middle English noun lade and its verb laden (to load or heap up), and eventually supplanted them, leaving only the related adjective laden, though some people still use the verb lade when talking about loading ships. The sense ‘amount usually loaded at one time’ appeared around the year 1300, while ‘a great number or amount’ was first used around the year 1600, as was the colloquial use of the plural, loads, for heaps or lots. The figurative sense, ‘a burden on your mind, soul or heart,’ first appeared in the late 16th century, but it was not used to mean ‘the amount of work someone has to do’ until the 1930s. The expression get a load of something was first used in the US in the 1920s. The verb, meaning ‘to place in or on a beast, person or vehicle,’ dates back to the late 15th century, and comes from the noun. It quickly expanded in meaning to replace laden (12th century), and completely took over the senses ‘to add to the weight of’ or ‘put a load on or in something’ by the year 1500. The sense ‘to take on a load or charge’ appeared in the early 18th century, while ‘to fill a vehicle with passengers’ was first used in the early 19th century. It has been used in reference to computer programs since the 1970s.

See full definition
Learn more about load in our forums

Load in other languages