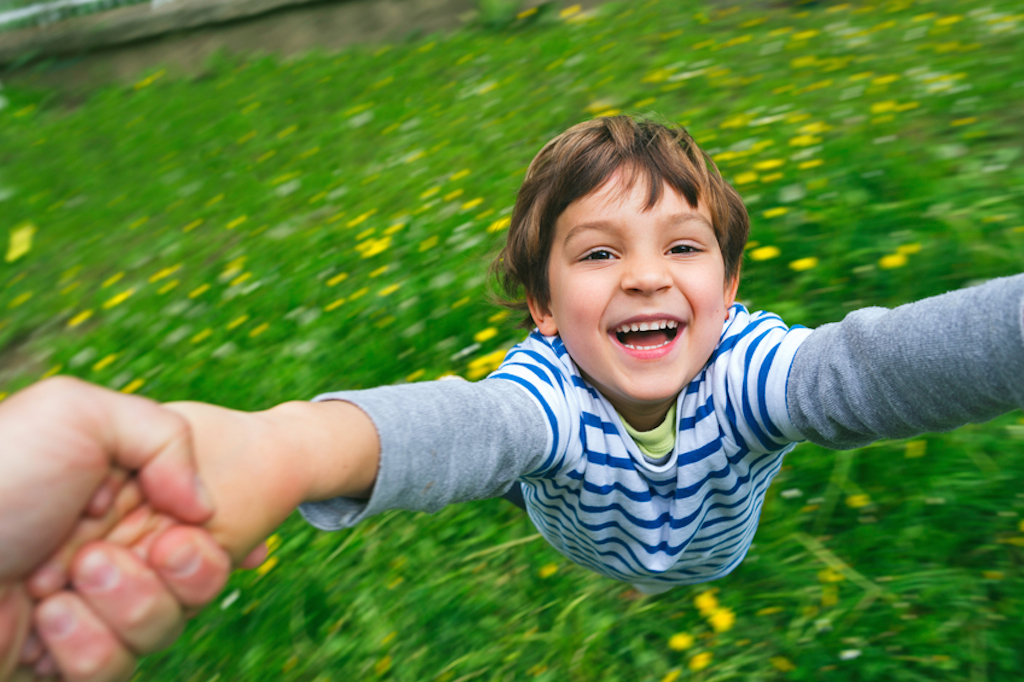 I love it when my mom spins me around in circles!

To spin means ‘to rotate quickly’ or ‘to have the feeling of rotating,’ usually to mean you feel dizzy. Spin also means ‘to travel quickly,’ ‘to invent a story’ or, with out, ‘to make something longer than necessary.’ In the textile industry it means ‘to form fibers into threads,’ and, in the animal world, ‘to form threads or webs from the body.’ As a noun, a spin is a rotating movement and, figuratively, a downward and sudden trend. Informally, a spin is a short drive for pleasure.

spin your wheels: not be doing anything productive. Example: “Laura was out of work and was just spinning her wheels while she waited for an opportunity to come along.”

Spin is also an informal term that means ‘to present information in a way designed to create a particular impression,’ usually used in politics. Example: “The story should have been a disaster for the government, but they spun it so that it looked like it was a positive development.”

A spin-off (or spinoff) is a TV show, film, or book derived from another successful production or publication. For example the TV show Better Call Saul is a spin-off of Breaking Bad. You can see the trailer for Better Call Saul here:

Spin is also something your washing machine does at the end of the wash when the drum rotates very fast in order to get excess water out of your clothes, so they will dry quicker. This part of the wash is called the spin cycle.

Spin dates back to before the year 900, as the Old English verb spinnan (Middle English spinnen), meaning ‘to twist fibers into thread.’ It can be traced back to the Proto-Germanic spenwan and the Proto-Indo-European root (s)pen- (to draw, stretch or spin). Spin is related to the Old Norse and Old Frisian spinna, the Danish spinde, the Dutch spinnen, the Old High German spinnan, the German spinnen and the Gothic spinnan (all of which mean ‘to spin’), as well as the Latin pendere (to hang or cause to hang), pondus (weight) and pensare (to weigh or, figuratively, to consider), the Greek ponein (to toil) and patos (garment, literally something that is spun), the Lithuanian spendžiu or spęsti (to lay a snare), pinu (I plait or braid) and spandau (I spin), the Old Church Slavonic peti (to stretch or strain), the Armenian henum (I weave), and the Middle Welsh cy-ffiniden (spider), along with many English words, including appendix, compensate, depend, expense, pansy, pendant, pension, penthouse, poise, ponder, pound, span, spangle, spanner, spend, spider, stipend and suspension. The intransitive senses ‘to form threads from fibers’ and ‘to twist or write’ also appeared in Old English, but after the year 1000, while the transitive ‘to cause to turn quickly’ dates back to the early 17th century, and the related intransitive sense, ‘to revolve or turn around quickly’ was first used in the mid-17th century. The sense ‘to present information in a way that creates a particular impression’ was first used in the US in the mid-20th century, but did not become popular until the 1980s. The noun, meaning ‘a quick revolving movement’ dates back to the early 19th century, and comes from the verb.

See full definition
Learn more about spin in our forums

Spin in other languages