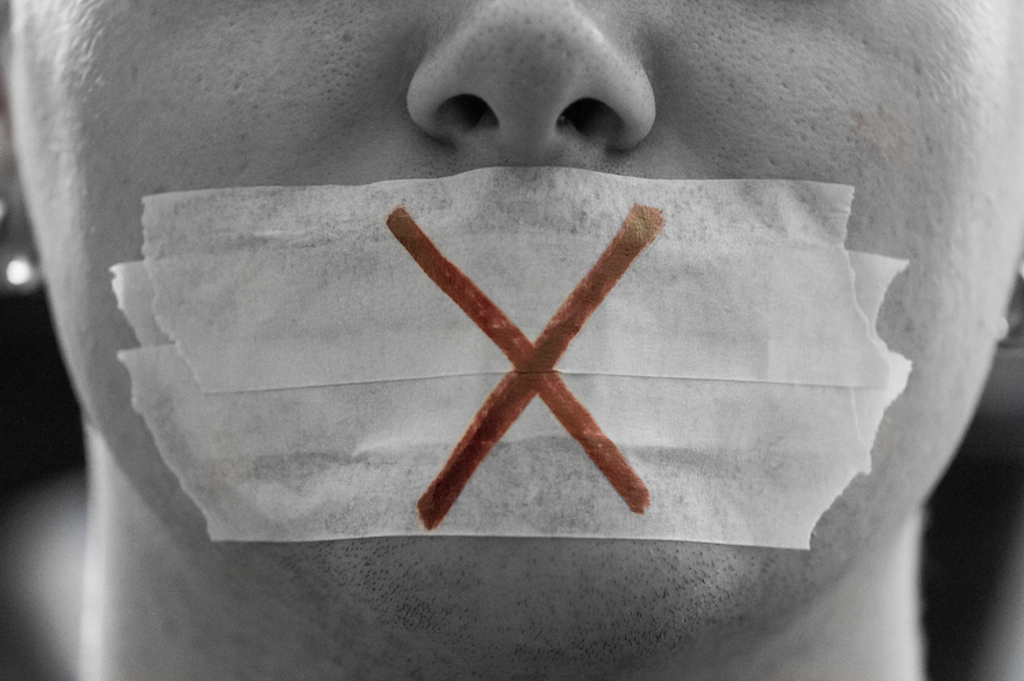 If someone is gagged, it means they can't speak.

A gag is anything put in or over someone’s mouth to prevent him or her from speaking or shouting, usually a piece of cloth with a ball in the middle or duct tape. Figuratively, a gag is any suppression of free speech. As a verb, to gag means ‘to prevent someone from speaking,’ either by putting something in their mouth or through suppressing free speech by force of authority. It also means ‘to choke’ or ‘to retch,’ as though you are going to vomit. However, gag has another unrelated meaning. As a noun, it means ‘a joke or prank’ and, as a verb, ‘to tell jokes’ or ‘to introduce gags in acting.’

sight gag: an element of visual comedy: “You should watch the movie carefully because it is full of hilarious sight gags.”

gag order: an order, often made by a judge, preventing someone from talking about a subject: “The judge issued a gag order, so we can’t discuss the details of the trial with the press.”

Movies and TV shows often use visual gags that involve something unexpected happening, like this one from the 1980s BBC comedy Only Fools and Horses:

A gag is also a kind of edible fish found along the coasts of the west Atlantic Ocean.

There isn’t much difference between the words gag and joke and the two are almost always interchangeable. However, gag is particularly used to refer to jokes in comedy performances and is much less common than joke.

Gag, meaning ‘to choke, suffocate or strangle,’ dates back to the early 15th century, as the Late Middle English verb gaggen. Its origin is uncertain; most linguists believe it appeared as an imitation of the sound we make when choking, others think that it came from the Old Norse gagg (yelp) or gag-hals (with the head thrown back). The sense ‘to stop a person’s mouth by putting something in it’ dates back to around the year 1500. The meaning ‘to retch’ appeared in the early 18th century, but ‘to cause someone to have nausea or retch’ has only been around since the 1940s. The noun, meaning ‘something put in your mouth to prevent you from speaking’ first appeared in the mid-15th century; it comes from the verb. The figurative sense, ‘repression of speech,’ was first used in the early 17th century. Gag laws were first used in the late 18th century in the US. Gag, meaning ‘a joke’ (especially a practical joke), dates back to the mid-19th century. It is thought to have evolved from a theatrical sense, ‘matter interpolated in a written piece by the actor’ (also from the mid-19th century), or from the earlier sense ‘made up story’ (early 19th century), itself from the slang sense of ‘to deceive with talk’ (late 18th century). All of these senses are now obsolete, and all are probably related to the other sense of gag, through the idea of ‘to stuff or fill (the mouth)’.

See full definition
Learn more about gag in our forums

Gag in other languages