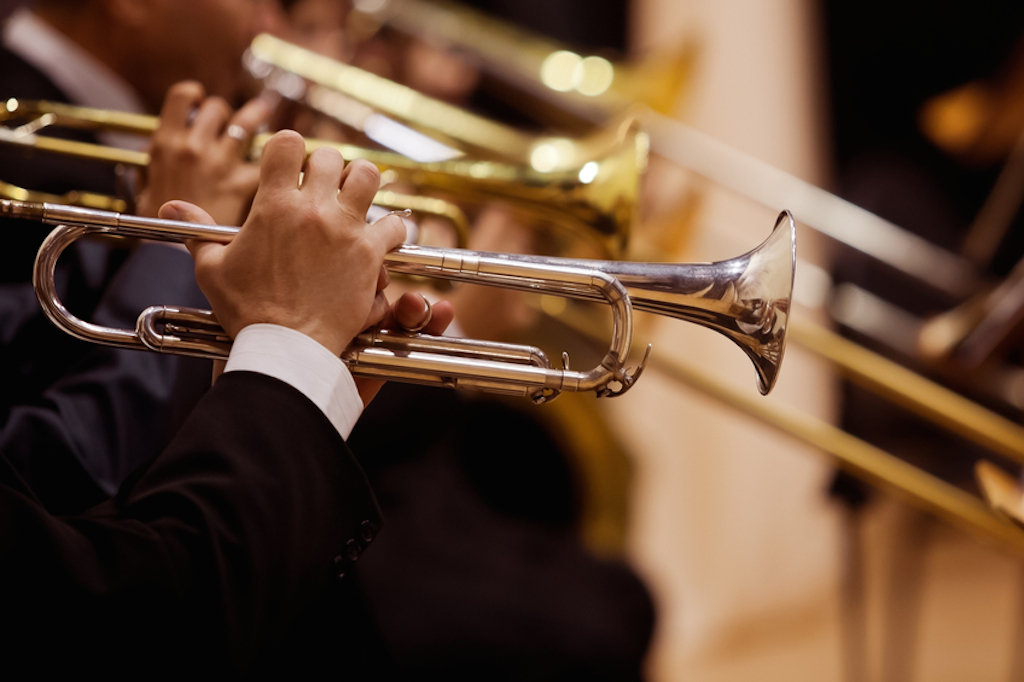 Part of the brass section of an orchestra

Brass is a metal alloy of copper and zinc. By extension, brass is any utensil or decorative object made of brass and, in music, brass is the sum of all the wind instruments made of brass, like trumpets, horns, and trombones. The brass is also a military term used to describe high-ranking officers. Informally, brass is an excess of self-assurance or impudence. As an adjective, brass refers to anything made out of brass or any piece of music composed for brass instruments.

be brassed off (UK): be really annoyed. Example: “Honestly, everything has gone wrong today. My car broke down and I got into trouble at work for being late. Then I had to walk home in the rain. I’m really brassed off.”

In UK English, particularly in the North of England, brass is also a slang term for money. It is used a little less these days than it once was, but you may still hear it or come across it in old books. Example: “I’d buy that house, if only I had the brass.” It is also sometimes heard in the Yorkshire dialect expression “Where there’s muck, there’s brass,” meaning that money can be made from doing unpleasant, dirty jobs that no one else wants to do.

Brassed Off is a 1996 movie about a brass band in the north of England. You can watch the trailer here:

Brass can also be used as a verb, meaning ‘to coat or cover something with brass,’ though it is not common.

Brass dates back to before the year 1000, as the Old English noun bræs (Middle English bras). It originally meant ‘a yellow alloy metal made with copper,’ and the name could be used for any alloy that included copper, especially bronze (a copper and tin alloy). Its origin is unknown, and there are no related words outside of English. This has not stopped linguists from proposing theories, though. Some think that brass could be related to the French verb brasser (to brew), and others propose a relation to the Old Swedish brasa (fire). Another theory links it to the Latin ferrum (iron), also of unknown origin. Because brass as we know it today (an alloy of roughly two parts copper to one part zinc) was first made by the Romans, use of the word in ancient literature, including English translations of the Bible, should usually be understood to mean ‘bronze.’ In fact, the noun brass was still used more generally, for any copper alloy, until the 16th century, long after the metal was commonly used. The figurative sense ‘hardness durability’ appeared in the late 14th century, and this sense evolved into the slang for ‘impudence or excessive assurance’ in the early 17th century. The sense ‘the brass instruments of an orchestra or band’ dates back to the early 19th century, while the slang sense for ‘high military officials’ is from around the year 1900, a play on the material of their badges. The adjective, meaning ‘made of brass,’ dates back to around the year 1400, and comes from the noun. The expression get down to brass tacks first appeared in the late 19th century in the US. The verb, meaning ‘to coat or cover something with brass,’ dates back to the mid-19th century, and also comes from the noun.

See full definition
Learn more about brass in our forums

Brass in other languages