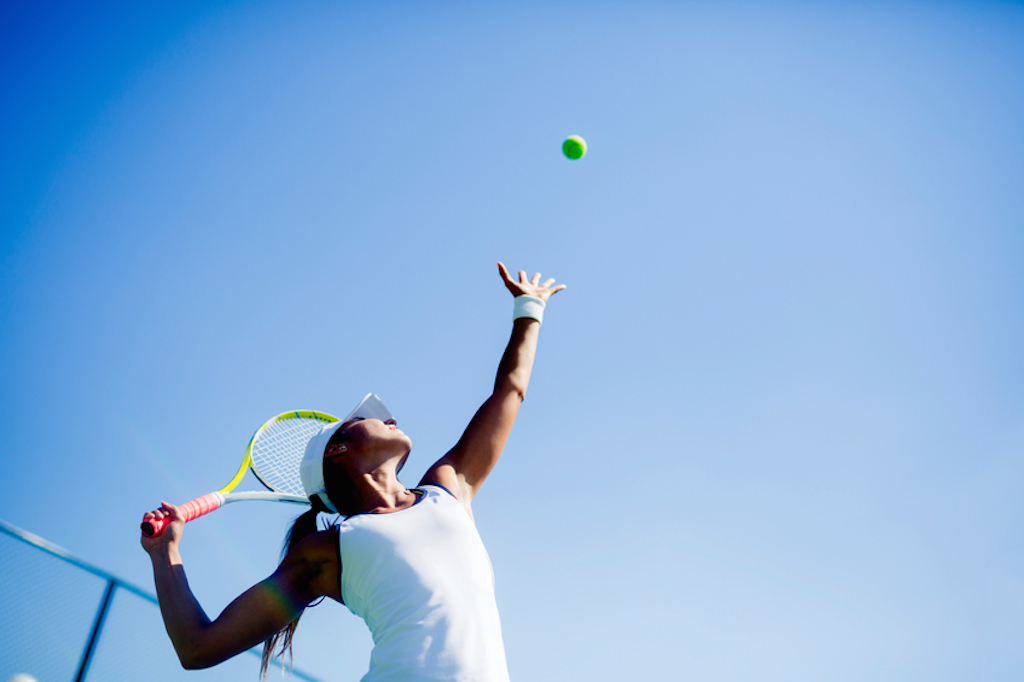 To serve means ‘to work for someone’ and also ‘to give food or drink to someone at a table.’ In the UK, it can also refer to helping someone in a store. It means ‘to help and provide assistance’ and also ‘to contribute or be useful to something.’ Serve also means ‘to go through a term of service,’ like in the army, or ‘to spend time in jail.’

serve someone right: be deserved. Example: “The dog bit you? I’m not surprised, with the way you keep teasing him; it serves you right!”

serve your time: complete a prison sentence. Example: “Mark has served his time, but people still don’t trust him.”

give someone a serve (AU): to tell someone off or criticize them. Example: “Amy gave Gary a serve for getting into trouble with the police again.”

In sports such as tennis, volleyball, or handball, to serve means ‘to start playing’ by hitting the ball. A serve, as a noun, is the act of serving.

Served Like a Girl is the title of a documentary about women who have served in the US army. You can watch the trailer here:

Many people may be familiar with the phrase you’ve been served from American TV shows about lawyers. In the legal sense, in the US, to serve someone is to give them an official notification that they have been sued and will need to appear in civil court. This is usually done in person, so there is no question that the papers have been received. This does not mean, however, that people can avoid being served by not taking the documents, or running and hiding once they are approached. Once the person delivering the documents (usually called a process server) has made direct contact, they may leave the papers outside the door or on a desk where you can later retrieve them. In exceptional cases, when a person cannot be found, delivering them to their known address can be considered enough. As for criminal cases, warrants to arrest someone or to search a property are also served, but in this case they are given to the person in question by the police before the arrest or the search.

Serve, meaning ‘to be obedient to someone’ or ‘to minister or give help to someone,’ dates back to the late 12th century, as the Middle English verb serven. It came into English from the Old French servir, which could mean ‘to obey someone in duty,’ ‘to show devotion to someone,’ ‘to set a table or serve at the table,’ or ‘to offer or provide someone with something.’ It can be traced back to the Latin verb servīre, which could mean ‘to be a servant,’ ‘to be in service’ or ‘to be enslaved,’ and figuratively ‘to be devoted,’ ‘to be governed by,’ ‘to comply with,’ or even ‘to flatter,’ though the original meaning was ‘to be enslaved.’ It is related to the noun servus (‘slave’ and, later, ‘servant,’), the origin of which is uncertain. It could have come from the Etruscan Servi or Serve (only recorded as proper names), or from the proto-Italic roots serwo– (shepherd) and serwa– (observation), from the Proto-Indo-European root seruo– (guardian). The senses ‘to be in the service of,’ ‘to provide a service for,’ ‘to be a servant of,’ ‘to be a slave of,’ ‘to owe allegiance to’ and ‘to officiate or hold religious rites’ all appeared around the year 1200, probably influenced by the Latin meanings, which were commonly used around that time. The senses ‘to set food at a table,’ which existed in the French verb, was first used in English in the mid-13th century, while ‘to wait on customers’ is from the mid-14th century. ‘To be useful, beneficial or suitable for a purpose’ first appeared in the early 14th century, and ‘to meet the needs or be equal to a task,’ as well as ‘to treat someone or something in a certain way’ is from the late 14th century. The expression ‘to serve someone right’ comes from this last sense, and was first used in the late 16th century. The sense ‘to do military duty’ appeared in the early 16th century, while the sport sense is from the late 16th century. The use of serve as a noun (in sports) is also from the late 16th century.

See full definition
Learn more about serve in our forums

Serve in other languages