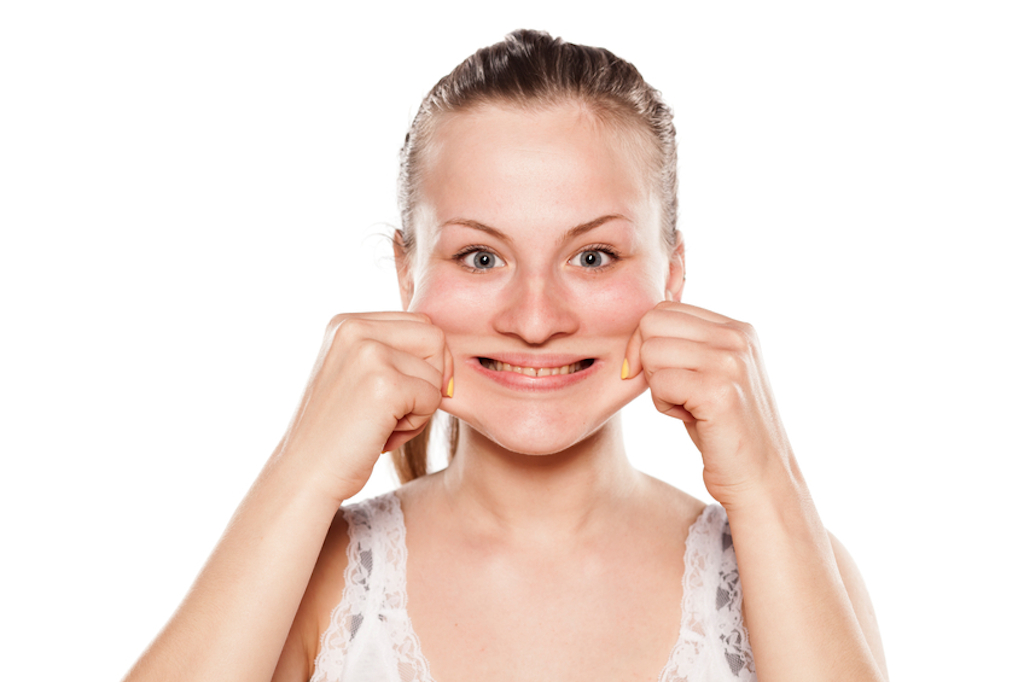 A woman pinching her cheeks

The cheeks are the sides of the face below the eyes and above the jaws, and they are also the inner sides of the mouth. Informally, a cheek is either side of the buttocks. A cheek is also either one of two sides of something that resembles the sides of a human face in some way. Cheek also means ‘impudence or rude behavior.’

have the cheek: have the audacity. Example: “I can’t believe you had the cheek to tell the boss how awful his shirt is!”

cheek to cheek: normally said about couples dancing or sitting very closely, so their cheeks are touching or almost touching. Example: “The dance floor was filled with young couples all dancing cheek to cheek.”

The related adjective cheeky means ‘impudent’ or ‘naughty.’ It is quite often used when speaking about or to children. You might, for example, tell your children not to be cheeky to their teachers. If a child answers back, that would normally be considered cheeky. In UK English, cheeky is also used to describe something a little bit naughty––something you shouldn’t really do, for example. So you could say, “It was a quiet day at work and no one else was in the office, so I took the opportunity to have a cheeky nap.”

Cheek, meaning ‘the side of the face, on either side of the mouth,’ as well as ‘the inner side of the mouth,’ dates back to before the year 900, in the form of the Old English noun cēace or cēce (Middle English cheke). It can be traced back to the Proto-Germanic kaukon, but its origin before then is unknown, and the word is not found outside of West Germanic languages. Cheek is related to the Middle Low German kake (jaw or jawbone), and the Middle Dutch kake and Dutch kaak (jaw). Originally, the Old English word also meant ‘jaw or jawbone’ (the original Old English word for cheek was ceafl, which evolved into jowl); the senses ‘the flesh on the side of the face’ and ‘the inner side of the mouth’ first appeared in Late Old English, in the 11th century and by Middle English, had replaced both the original sense of the word, and the use of ceofl (jowl) with that meaning. Jowl now means the lower part of a person or animal’s cheek, especially if it’s drooping. Cheek has been used to refer to the buttocks since around the year 1600. The figurative sense, ‘rudeness or brazen impudence,’ was first used in the mid-19th century. The expression cheek by jowl, has been around since the mid-16th century, though cheek by cheek had been used to mean the same thing since the 14th century. Cheek to cheek, referring to dancing close together, dates back to the early 20th century.

See full definition
Learn more about cheek in our forums

Cheek in other languages