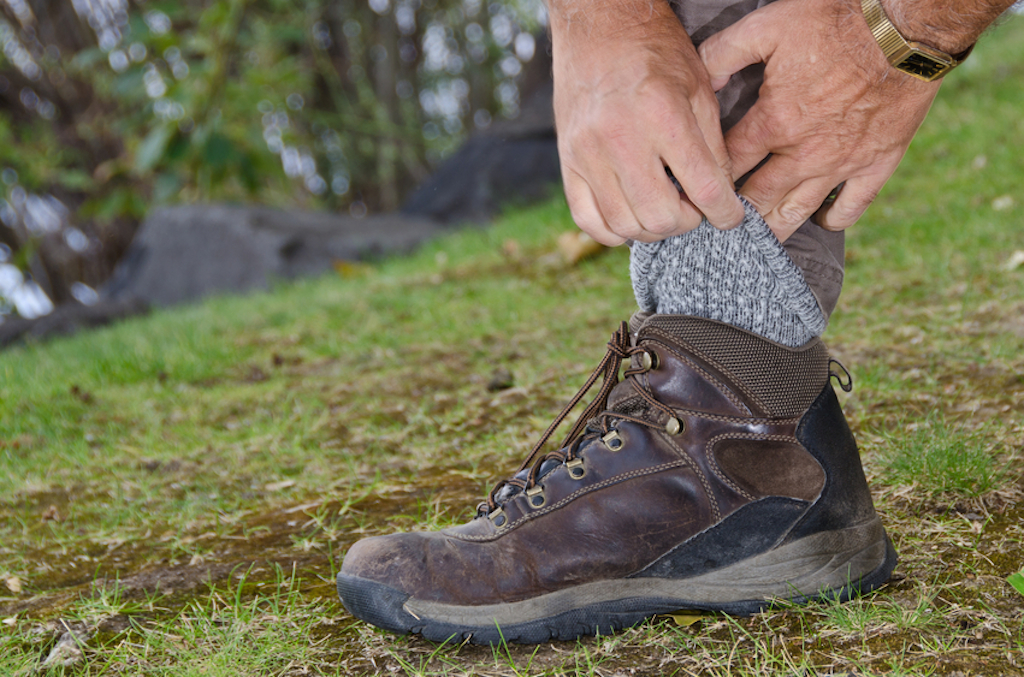 A man tucking his pants into his socks

To tuck means ‘to put something into a closed and secure place’ (often with away) and also ‘to hold something in place by pushing the loose ends of it into or under something’ (often with in, into or under), as we do with clothes or bedsheets. Tuck also means ‘to put a child to bed’ (always with in), sometimes literally by covering them tightly with the sheets under the mattress. In the UK, tuck in also means ‘to start eating something.’ As a noun, a tuck is a fold sewn into cloth to make a tighter fit or to add decoration. It is also a position in sports such as skiing, where the knees are bent and the arms are held close to the chest. In addition, it is a verb to describe this movement.

In UK English, tuck is also an informal word, particularly in school vocabulary, for food, especially cakes and sweets. It is a little bit dated now, but you will still see it in books, especially ones about schools, and some schools still have tuck shops. A related word in Australian and New Zealand English is tucker, which is also an informal word for food, but it’s not particularly related to schools or schoolchildren.

Watch the trailer for Tuck Everlasting, the 2002 movie adaptation of the children’s book of the same name, here:

Tuck dates back to before the year 900, but its original meaning was quite different. The Old English verb tūcian meant ‘to torment or vex.’ It can be traced back to the Proto-Germanic root teuh– or teug– (to draw or pull) and the Proto-Indo-European root dewk– (to pull). Tuck is related to the Old Frisian togia (to pull about), the Old Norse toga, the Old High German zogon and the German ziehen (to draw, pull or drag), and the German zucken (to tug), as well as the Latin dux (‘leader or commander,’ and later ‘the governor of a province’) and ducere (to lead), the German Zaum (bridle) ziehen, the Middle Welsh dygaf (I draw), and English words such as abduct, aqueduct, conduct, deduce, dock, douche, duchess, duct, duke, educate, introduction, misconduct, produce, reduce, seduce, team, tie, tow and tug. In Middle English, the sense of the verb toucken or tucken narrowed, becoming ‘to torment or stretch cloth,’ and by the late 14th century, through influence of the Middle Dutch verb tucken, it changed to a sense closer to the modern one: ‘to pull or gather up.’ The meanings we use today, ‘to hold something down by putting its ends under something else’ and ‘to put something away’ both appeared in the late 16th century. The colloquial sense ‘to start eating’ was first used in the late 18th century. The noun, originally meaning ‘pleat or flattened fold in clothing,’ dates back to the late 14th century, and comes from the noun. The sense ‘a folded up position used in certain sports’ was first used in the 1950s.

See full definition
Learn more about tuck in our forums

Tuck in other languages