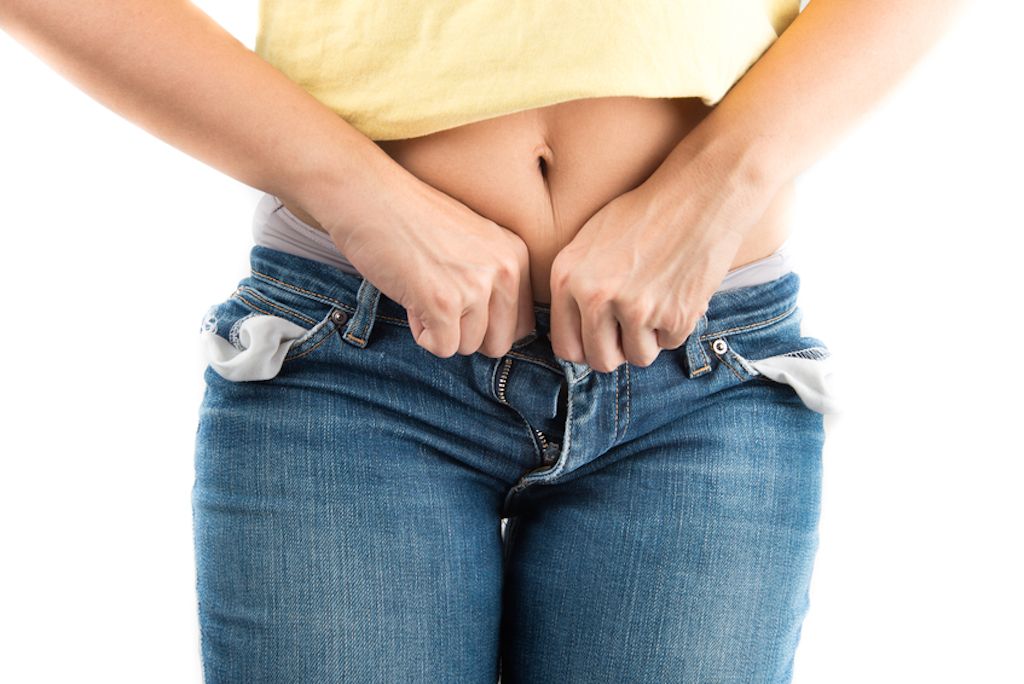 These jeans don't fit. They're too small.

As an adjective, fit means ‘suitable or appropriate’ and is usually followed by for and a noun or to and an infinitive. It also means ‘ready’ and it is used to describe someone in a very good physical condition. As a verb, fit means ‘to be suitable or proper for something’ and also ‘to be of the correct size’ or ‘to make something the right size for something or someone.’ Finally, fit means ‘to provide or equip something’ and in this sense it is often used with out. As a noun, a fit is the way in which something fits in size or shape, or something that fits, normally in terms of suitability.

fit to be tied: very annoyed or angry. Example: “When my colleague, who hadn’t helped with the project at all, criticized my work, I was fit to be tied!”

throw a fit: become extremely angry. Example: “Jane’s parents threw a fit when she stayed out all night without telling them where she was.”

fit like a glove: be the perfect size. Example: “My wedding dress fits like a glove. I look great!”

A fit is also a sudden attack usually involving convulsions . Example: “When Rob forgot to take his medication, he’d have fits from time to time.”

More mildly, it’s a period of or extreme behavior or intense emotion. Example: “When Kathy saw that her son hadn’t cleaned his room, she had a fit.”

The phrasal verb fit in means ‘to adapt to the environment you find yourself in,’ normally by following the rules or customs of a group. Example: “Teenagers are always particularly concerned with fitting in with everyone else.”

Fit dates back to the late 14th century, in the form of the Middle English verb fitten, which was originally used in military contexts, and meant ‘to marshal or deploy troops.’ Its origin is unknown. The sense shifted in the early 15th century, becoming ‘to be suitable or proper,’ probably due to the influence of similar Scandinavian verbs, such as the Old Norse fitja (to knit). The senses ‘to be the right shape or size’ and ‘to provide with what is suitable’ both appeared in the late 16th century, while ‘to make suitable or bring into suitable condition’, and ‘to make the correct size’ date back to around the year 1600. The adjective, meaning ‘suitable or appropriate,’ dates back to the mid-15th century, and probably came from the verb, though some linguists think it evolved from a noun sense that fit had in Middle English, when fit could also meant ‘an adversary of equal power.’ This noun either came from or evolved with the original, military sense of the verb. The sports sense, ‘in condition or trained for action,’ was first used in the mid-19th century. The noun, meaning ‘the process of fitting,’ dates back to the late 17th century, and comes from the verb. The senses ‘the fitting of one thing to another’ and ‘the way something fits’ are both from the early 19th century. Finally, the noun meaning ‘a sudden attack or convulsion’ as well as, figuratively, ‘a sudden attack of extreme emotion,’ dates back to the mid-16th century. It evolved from the Middle English fit, meaning ‘painful or exciting experience’ and the Old English fitt (struggle or conflict). Though its origin is also uncertain, most linguists think it is not related to the other senses of fit (some linguists think it is, and make the connection through the adjective). The sense ‘a sudden impulse of activity or effort’ appeared in the late 16th century.

See full definition
Learn more about fit in our forums

Fit in other languages