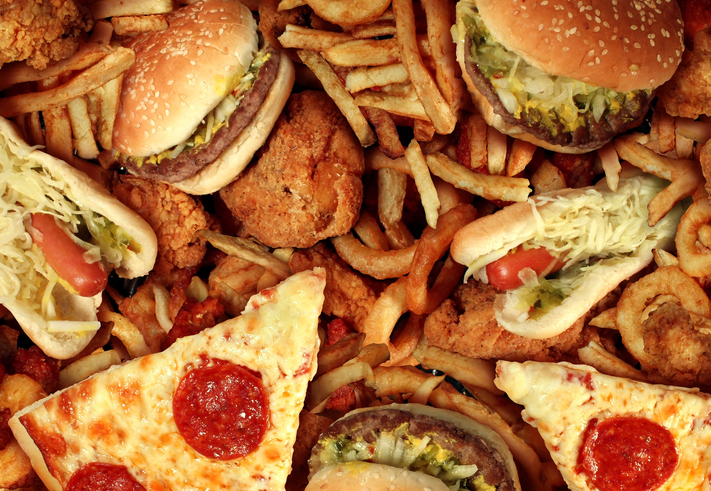 Dieters usually avoid junk food that is full of grease.

Grease is the melted fat of animals, especially when it’s in a soft state, which can be used for cooking. It is also any oily matter used as a lubricant. As a verb, to grease means ‘to lubricate or to put grease on,’ and more figuratively, ‘to make something easier and smoother.’

grease someone’s palm: bribe, or give money to get something you don’t deserve. Example: “The politician greased the police captain’s palm and her son was released with only a warning.”

grease fire (US): a fire caused by cooking oil or fat catching fire (in UK English, this is called a chip pan fire). Example: “You should never throw water on a grease fire; you need to use a lid to smother the fire so it has no oxygen.” Here’s an article about grease fires from The Kitchn, a popular American website with articles on food and cooking.

elbow grease: physical exertion or hard work. “You’re going to need some elbow grease to clean the frying pan. I burnt eggs this morning and they are stuck to it and will be difficult to get out.”

In the US, in the late 1940s and 1950s, there was a youth subculture whose members were called greasers, because they used to grease back their hair using greasy creams or other hair products. Rock and roll music was a big part of this culture and clothing and fashions were heavily influenced by stars like Elvis, Little Richard, or Johnny Cash. Greasers generally wore jeans or leather pants with T-shirts and denim or leather jackets. You may have seen something of this culture in the movie Grease. In this scene from the movie you can watch greasers from the movie, including Danny Zuko (John Travolta), singing the song “Greased Lightning,” which is about a car:

They are working in a garage, so there is a lot of grease around––on their clothes, in the car, and of course, in their hair!

Another way we use fat figuratively to talk about making something easier and smoother is in the phrase butter someone up. It is similar to grease someone’s palm, but instead using money to grease a situation to make it easier, when you butter someone up, you use flattery (ie, excessive compliments) to manipulate that person and make things easier for yourself. Example: “Justin buttered up his boss by telling her that he liked her new hairstyle.”

Grease, meaning the fat of (usually land) animals, first appeared in the mid-13th century, as the Middle English noun grese, grece or greice. It came to English through the Anglo-French grece or gresse, which in turn came from the Old French craisse or gresse. It can be traced back to the Vulgar Latin term *crassia, a noun formed from the earlier Latin adjective crass(us), which meant ‘fat’ or ‘thick.’ It is related to the Spanish grasa, the Italian grassa and the French graisse. The verb comes from the noun, and appeared in the 14th century. The expression grease the wheels is almost as old, and was first used in the mid-15th century. You might find it interesting that greased lightning, like the Grease song in the clip we mentioned, has been used to mean something very fast since the 1800s.

See full definition
Learn more about grease in our forums

Grease in other languages