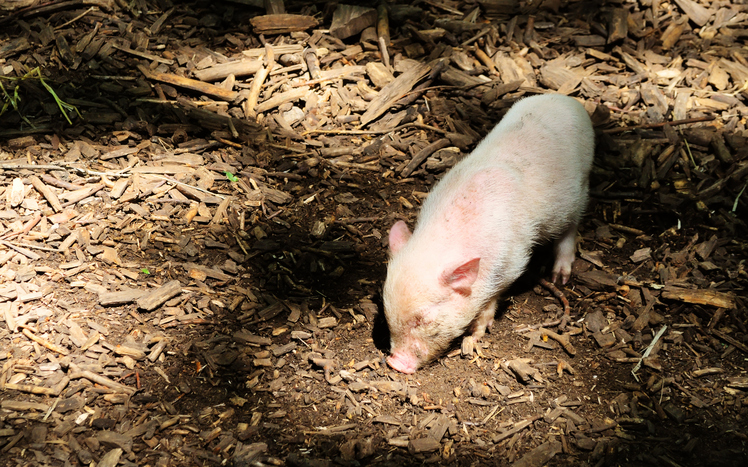 A pig routing for food.

A rout is a defeat that is followed by a retreat and dispersal, usually a disorderly one, or more generally, any overwhelming defeat or disorderly group of people. As a verb, to rout means to defeat completely and to make a group disperse, or go away, in a disorderly way. Rout has another unrelated meaning as a verb, ‘to dig up or turn over something’ as animals do with their snouts (a snout is the nose of animals like pigs). More generally, usually followed by out, it means ‘to find by searching,’ or ‘to get rid of by searching.’

These days, the noun rout is used more commonly in sports than in war. Here’s an example of a baseball announcer using the word to describe a game in which the Red Sox beat the Mariners 15-1:

Of course, we can also get rid of other types of “enemies” by routing them out. By clicking here you can watch a 1942 short film from the UK, in which we can see recommendations for routing out rats, considered enemies because they could spread disease.

In British English, to rout also means ‘to make a loud sound’ generally used in reference to thunder or the wind, and it is also the noun that describes this kind of sound. However, it is now rare, although you may still hear it in Scotland.

Rout first appeared in English in the early 13th century, and meant ‘a troop of soldiers,’ as well as a ‘gang of outlaws or a mob.’ It came to the language through the Anglo-French rute and the Old French route, which meant ‘troop or crowd,’ and can be traced back to the Latin rupta (a broken or dispersed group), the feminine past participle of rumpere, ‘to break.’ This is where the legal sense we still use comes from. By the 14th century, it was used more generally, to mean a group of people.’ The meaning we know today, ‘a disorderly retreat after a defeat,’ first appeared in the late 16th century. The verb was first used in the early 17th century, and comes from the noun. The other meaning of rout, ‘to poke about or rummage,’ dates back to the mid-16th century. It is a variation of the verb root.

See full definition
Learn more about rout in our forums

Rout in other languages

Rout was suggested by a user from Japan.