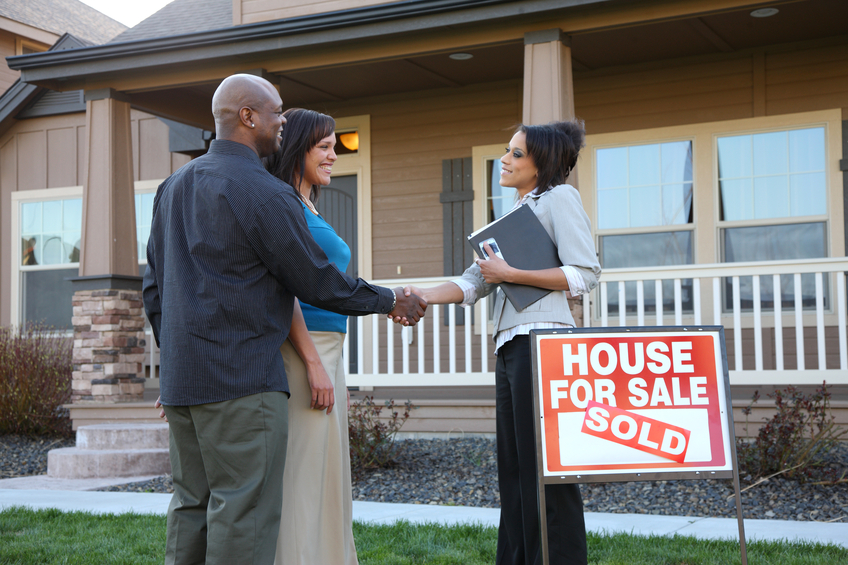 We got a great deal on our house.

To deal, always followed by with, means ‘to be concerned or to have to do with something,’ ‘to conduct oneself toward people,’ and ‘to take the necessary action regarding something or someone.’ To deal also means ‘to deliver’ and ‘to do business’ and, particularly with drugs, it means ‘to buy and sell illegally.’ When talking about playing cards, deal means ‘to distribute.’ As a noun, a deal is an arrangement, a business transaction, and, informally, the treatment received by another person. In card games, a deal is a distribution of playing cards.

cut a deal: come to an agreement, especially in business. Example: “The clothing company cut a deal with a factory to make their products more cheaply.”

deal with it: stop complaining and accept the situation. Example: “I know you don’t like your new boss, but you need your job, so you’ll just have to deal with it!”

big deal: something important. Example: “Bridget has just been accepted to do a course at Oxford University. It’s one of the best universities in the world, so it’s a really big deal.” Big deal is often used in the negative––not a big deal or no big deal. Example: “Don’t worry if you haven’t finished that work yet. It’s no big deal; it can wait until next week.”

Deal or No Deal was a popular game show with versions in the US and UK. Contestants were presented with 22 identical boxes to open. Each box contained a sum of money, ranging in values up to £250,000. A contestant would choose a box and then a banker would make them an offer of actual money to buy the box (which had not yet been opened, so no one knew how much it was worth). The contestant had to try to get as much money as possible and, of course, the banker would try to pay as little as possible. The contestant would either say “Deal,” to accept the banker’s offer, or “No deal,” to reject it, in which case they would be given the opportunity to swap boxes with another contestant or keep the one they have. They then open the box and win the amount inside. Here is a clip from the show in which one lucky contestant wins the highest amount of £250,000!

Sometimes supermarkets call the special offers they run on prices of particular products deals. So you might say that a particular supermarket has a buy one get one free deal on bags of oranges, for example, meaning that if you buy one bag of oranges, you get another one completely free.

Deal dates back to before the year 900. The Old English verb dǣlan (to divide, share, or distribute), which later became the Middle English verb delen, comes from the Old English noun dǣl, meaning ‘part.’ It is related to the German noun Teil (part) and accompanying verb, teilen (to distribute or divide). It has been used in card games since the early 16th century. The other meaning of the verb, ‘to handle someone or something,’ first appeared in the mid-15th century. The noun is as old as the verb, though the original meaning of the Old English dǣl and the Middle English deel or del(e) was just ‘part.’ It came to include several more meanings, which you’ve seen above, most of them related to the verb.

See full definition
Learn more about deal in our forums

Deal in other languages