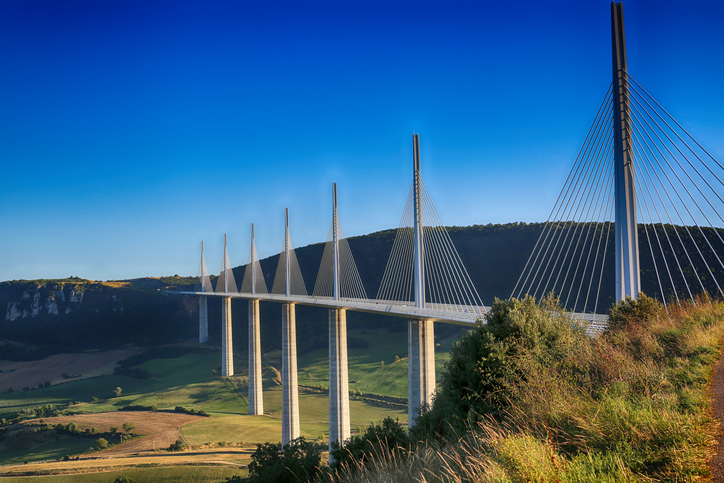 Span means ‘the full extent or reach of something’ or ‘the period of time over which something continues.’ In architecture and civil engineering, it is the distance or space between the two supports of a structure, such as an arch or a bridge, and, if we are talking about aircraft or birds, it is the distance from wing tip to wing tip. It is also a term used for measuring and it’s the distance between the tip of the thumb and the tip of the little finger when the hand is fully extended, commonly taken as 9 inches or 23 centimeters. As a verb, to span means ‘to extend or reach over space or time’ and also ‘to provide with something that extends over or across.’

spick and span: very clean and tidy. Example: “Ben spent the morning doing the housework and, by lunchtime, the apartment was spick and span.”

Your attention span is how long you can concentrate on something for without getting distracted. Some people have longer attention spans than others. Here’s a clip from The Simpsons about Homer’s attention span:

In US English, a span can also be a pair of horses or other animals harnessed and driven together, although this sense is now rare.

In computer programming, span is an HTML tag that is used to hook inline elements, so they can be easily grouped and found, to apply different styling and display elements.

Span dates back to before the year 900. The Old English noun span(n) or spo(n), which could be spelled spanne, sponne and even spayn in Middle English, originally meant ‘the distance between the thumb and the little finger of an extended hand,’ and was used as a unit of measurement. It can be traced back to the Proto-Germanic spannan, from the Proto-Indo-European root (s)pen (to draw, stretch or spin). It is related to the German Spanne, the Dutch span and the Old Norse spǫnn (all meaning ‘span’), as well as the Old Norse spenna, the Old Frisian spanna, the Middle Dutch spannen, the Dutch spannan (‘to stretch or bend‘ and ‘to hoist or hitch’), the Old High German spannan and the German spannen (to join, fasten, extend or connect). The Medieval Latin spannus borrowed the term from Germanic languages, and is the source for the Italian spanna, Old French espan and French empan (all of which are a reference to the same unit of measurement). Through the PIE root, span is also related to English words such as spin, expensive, pension, pending and spider. The sense had expanded to ‘the distance between two objects’ (including the wings of a bird) by the 13th century, and was also used as a measure of volume (the amount that could be held in two cupped hands) since the early 14th century (this use is now obsolete). It was first used to mean ‘length of time in the late 16th century, and has been used in architecture as the distance between two supports of an arch since the early 18th century. The verb also dates back to before the year 900 (it is impossible to know if the noun or the verb came first). The Old English spannan (spaynen in Middle English) could mean ‘to join, link, clasp fasten or connect’ as well as ‘to stretch or span.’ The meaning ‘to form an arch over something’ dates back to the early 17th century, while ‘to encircle with your hands’ is from the late 18th century. The noun meaning ‘two animals yoked together’ first appeared in American English in the mid-18th century. It is, of course, related to the other senses, but not directly. It came into English from the Dutch verb spannen (to stretch or yoke).

See full definition
Learn more about span in our forums

Span in other languages