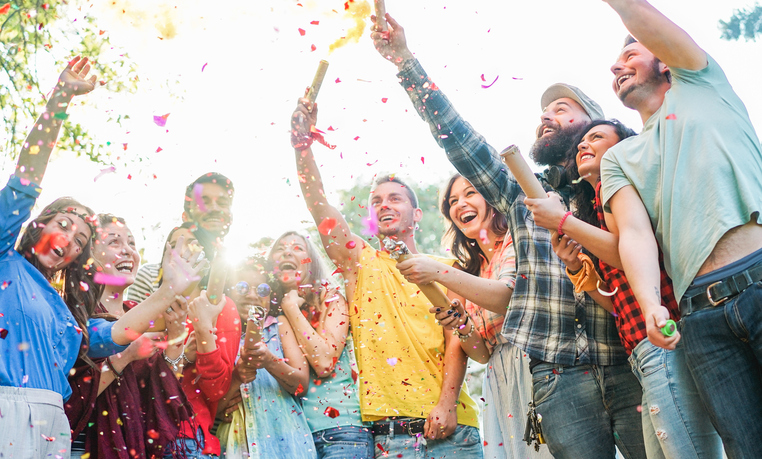 Jolly is now quite a dated word, but you will often hear it in older movies or read it in older books, especially British ones. As an adjective, jolly means ‘merry or in a good mood,’ if we’re talking about people, and it means ‘cheerful and festive,’ if we’re talking about events. As a verb, if you jolly someone into something or jolly someone along that means you ‘keep them happy,’ especially in order to gain something from them. In British English, jolly can be used as an adverb, meaning ‘very.’ Also in the UK, jolly is a slang term for ‘slightly drunk.’ These last two senses are very dated now.

Although the term jolly is dated, you will still hear it in the song “For He’s a Jolly Good Fellow,” which is sung to congratulate someone on an important event or a victory. You can hear it being sung here in the movie The Life of Brian:

There is more than one version of the song in English and there are also versions of it in many other languages. You can read more about the song here.

Jolly can also be a noun. As a singular noun it means anything you do for pleasure or enjoyment, such as an outing or a party. Example: “We’re going on a jolly to the coast at the weekend.” In the plural, jollies are thrills or enjoyment, especially ones that come from something improper or disapproved of by others. Example: “That cruel boss gets his jollies from bullying his staff.”

Jolly, meaning ‘merry, cheerful or comical’ dates back to the late 13th century. The origin of the Old Middle English adjective joli or jolif is uncertain, but we do know that it came into English from the Middle French jolif (festive or merry,’ amorous’ or ‘pretty’). Its first appearances in English were as a surname, though in the 14th century, it was also often a name given to pet dogs. Some linguists believe that, though it came from the French, the origin of jolly is Germanic, and cite the Old Norse jōl (Yule, a pagan winter feast) as evidence. Others, however, think this is unlikely, and point to the Latin verb gaudere (to rejoice) from the Proto-Indo-European root gau– (to rejoice). It would, thus, be related to the Italian giulivo (merry) and the English noun joy. The sense expanded to ‘great, remarkable or uncommon’ in the mid-16th century, and it has been used as slang for ‘slightly drunk’ since the mid-17th century. In the 13th and 14th centuries, jolly had a much wider meaning than it does now, and could be used to mean ‘vigorous and strong,’ ‘youthful,’ ‘amorous,’ ‘ready to mate or in heat,’ ‘lecherous,’ ‘pleasing,’ ‘beautiful or handsome,’ ‘noble looking,’ ‘well dressed,’ ‘playful or frisky’ and even ‘arrogant or foolish.’

See full definition
Learn more about jolly in our forums

Jolly in other languages