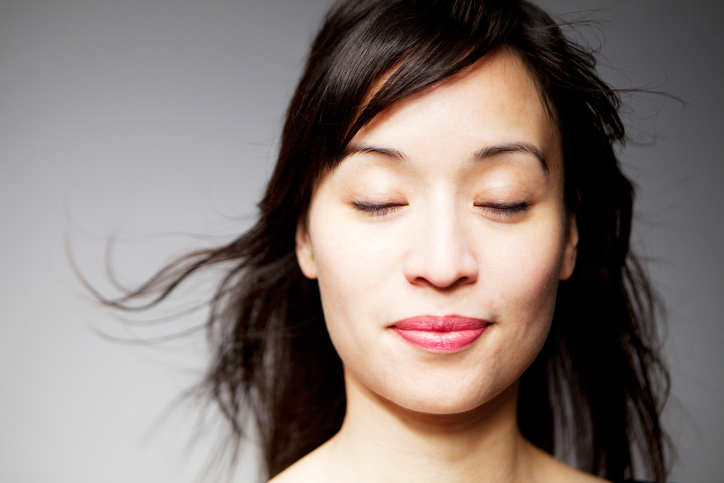 You might already know that blink is something we constantly do without even realizing; it means ‘to open and close your eyes involuntarily’ and ‘to open and close your eyes on purpose.’ ‘To look with winking or half-shut eyes,’ as we do when there’s too much light, is also to blink. Figuratively, if you blink at something, it means you’re surprised or startled by it. Also followed by at, blink can mean ‘to ignore.’ If a light blinks, it means it shines unsteadily, dimly, or intermittently. A blink, as a noun, is the act of blinking.

on the blink: not working properly. Example: “The washing machine is on the blink. I’ll have to call someone out to repair it.”

Blink 182 is an American pop punk band. You can listen to their song “All the Small Things” here:

The origin of blink is uncertain, to the point that different sources give different dates for its appearance in English. Many linguists date blink to the late 13th century, in the form of the Middle English verb blynken or blinken, a variant of blenken (blench, meaning ‘to flinch, to move suddenly or to raise your eyelids’). Others take the same date, but find that the Middle English noun blynke (a brief gleam or spark) came from the verb blenken. In either case, there is a possible relation to the Old English verb blencan (to deceive). Thirdly, some linguists place the origin as late as the 1580s. According to this theory, blink came into English from the Middle Dutch blinken (to glitter), and is probably related to an obsolete Old English verb, blican (to shine or glitter). Finally, some linguists think that the origin is older, perhaps before the year 1000, in this very Old English verb blican. Whichever the case may be, blink can probably be traced back to the Proto-Germanic blenk (to shine, dazzle or blind) and the Proto-Indo-European bhel– (to shine, flash or burn), since the origin theories are all related at some point or another. Blink is, therefore, related to the Dutch and German blinken (to blink), and more distantly, to the Sanskrit bhrajate (shines), the Greek phlegein (to burn) the Latin flamma (a flame), fulmen (lightning), fulgere (to shine or flash) and flagrare (to burn, blaze or glow), the Old Church Slavonic belu (white) and the Lithuanian balnas (pale). It is also related to many English words, including black, blanch, blank, blanket, blaze, blemish, blend, blind, blond, blue, blush, flagrant, flamboyant, flame and flamingo. The verb went through a variety of shifting meanings, all related to eye movements. The earliest senses were related to glancing, but later the idea of winking predominated. The meaning ‘a short, involuntary closing of the eyes,’ now the most common sense, only appeared in the mid-19th century. Its meanings related to light, in particular ‘to cast a sudden, fleeting light’ on something, date back to the late 18th century. The noun comes from the verb though, as above, some theories have it appearing in English around the year 1300, while others cite the late 16th century.

See full definition
Learn more about blink in our forums

Blink in other languages