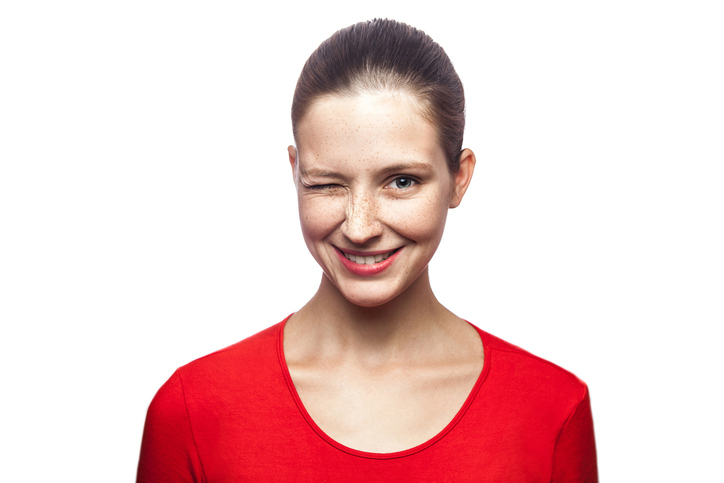 To wink, as you may know already, means ‘to close and open just one eye very quickly,’ often as a signal or hint of something. It can also be used as a synonym of ‘blink’, that is, opening and closing both eyes quickly. If lights wink, it means they go on and off very quickly or shine with little flashes of light. But wink, always followed by at, means ‘to ignore deliberately.’ As a noun, a wink is the act of winking or a flash of light.

Listen to Harry Connick Jr singing “A Wink and a Smile,” from the soundtrack of the movie Sleepless in Seattle, here:

An early meaning of wink was a period of sleep. That meaning can now only be found in the expressions “not sleep a wink” or “not get a wink of sleep,” which mean not to sleep at all, or the expression “forty winks,” which means a short sleep, also known as a nap.

Wink dates back to before the year 900. The Old English verb wincian (winken in Middle English) meant ‘to wink or blink,’ or ‘to close your eyes quickly.’ It can be traced back to the Proto-Germanic wink-, which was probably a variant of a root (possibly wank-) meaning ‘to stagger’ or ‘to stray,’ from the Proto-Indo-European root weng– (to bend or curve). It is related to the Dutch winken, the Old High German winkan (to move sideways, or stagger,’ or ‘to nod’) the German winken (to wave or wink), the Old High German wankon (to stagger or totter) and the Old Norse vakka (to stray or hover). The sense ‘to close an eye as a signal’ was first recorded around the year 1100, while the figurative use of wink at meaning ‘to close your eyes to something or ignore it deliberately’ dates back to the early 15th century. The noun, meaning ‘a quick shutting and opening of the eyes,’ comes from the verb and dates back to around the year 1300. The figurative sense ‘a brief moment in time’ first appeared in the late 16th century.

See full definition
Learn more about wink in our forums

Wink in other languages