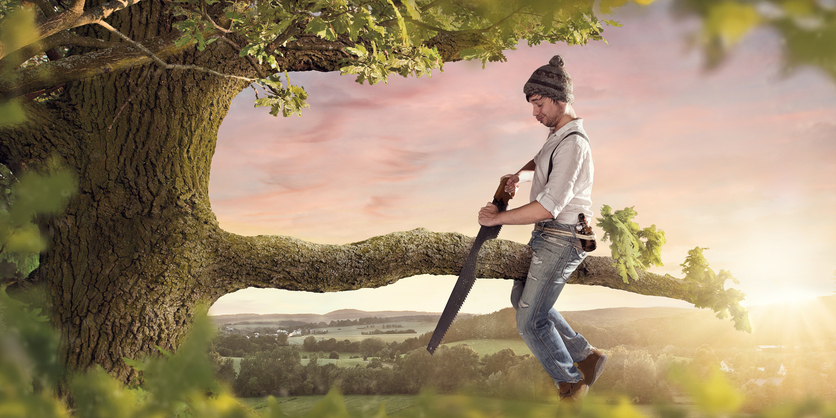 Cutting the branch you're sitting on is pretty dumb.

You might have heard the adjective dumb used to describe people or actions, with the meaning of ‘stupid’ or ‘silly.’ It also means ‘useless’ when talking about things. If we are talking about an animal, it means ‘without the power of speech.’ This last sense can be used to talk about humans too, but it is now considered offensive. Along these lines dumb means ‘temporarily unable to speak’, ‘done without speech,’ and ‘silent.’ In computing, if a terminal is dumb, it means it cannot independently process data.

strike someone dumb: this expression is usually used in the passive voice and it means someone is temporarily unable to speak because of surprise or some other strong emotion. Example: “Witnesses to the accident were struck dumb by the horror of the scene.” You can also use the adjective dumbstruck to describe someone who has been struck dumb.

dumb down: if you dumb something down, that means you make it easier to understand so that it will appeal to more people. Example: “The movie critic complained that American movies were being increasingly dumbed down.”

Watch the trailer for the 1994 movie Dumb and Dumber here:

A dumb-waiter is a device for transporting food from a kitchen to a dining room on a different floor of the house and transporting the dirty dishes back to the kitchen. It is kind of small elevator, worked with pulleys and weights. They aren’t very common these days, but in the days when many people still had domestic servants, it was a good way of getting the food from the kitchen, which was traditionally in the basement of the house, to the dining room upstairs, while it was still hot. Nowadays, you are more likely to find such devices in restaurants or hotels than in a private home.

Dumb dates back to before the year 1000. The Old English adjective dumb, meaning ‘silent or unable to speak’ can be traced back to the Proto-Indo-European root deubh-, meaning ‘confusion, stupefaction or dizziness,’ from the root dheu– (dust, mist, vapor or smoke). Dumb is related to the Old Norse dumbr, Gothic dumbs and Old Saxon dumb (all meaning ‘mute or speechless’), as well as the Old High German tumb or thumb (which could mean ‘mute’ or ‘stupid’) and the German dumm (which kept only the ‘stupid’ sense). In English, the sense ‘stupid or foolish’ was sometimes used for dumb, but it was not common, and disappeared. Our modern use of this sense appeared in the early 19th century, influenced by the German. Dumb was used as a verb, meaning ‘to become mute,’ and the sense ‘to make mute’ appeared around the year 1600, but this verbal use is obsolete now. The expression ‘to dumb something down’ is from the 1930s.

See full definition
Learn more about dumb in our forums

Dumb in other languages