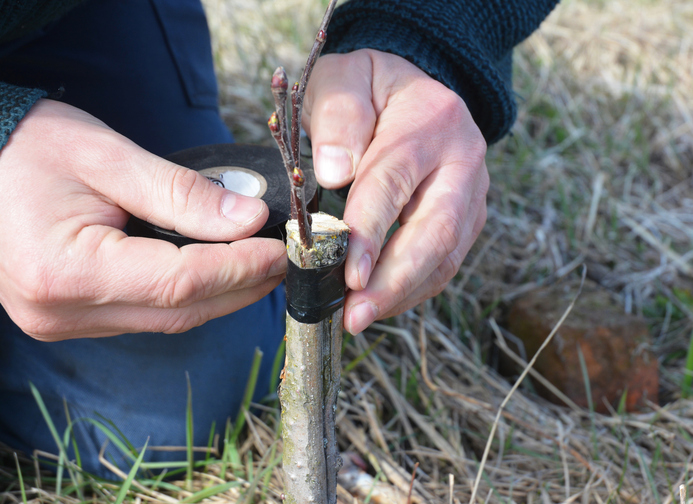 In botany, a graft is a bud or small shoot of a plant placed into a groove or slit in the stem or trunk of another plant in which it continues to grow. In surgery, it is a portion of living tissue removed from someone during a medical operation and transplanted to another part of the same person or to a different person. The verb to graft means both ‘to reproduce a plant through grafting’ and ‘to transplant tissue as a graft.’ Unrelatedly and informally, graft is also ‘the obtaining of money or advantage by dishonest or unfair means, especially through the abuse of position or influence, such as in politics.’ The money or advantage acquired is also called graft. This latter sense is most common in US English, as, in UK English, graft is more frequently used as an informal word for work, especially hard work, and the verb to graft means ‘to work.’

Listen out for the lyric “the skin graft man won’t get you.”

You might wonder why someone would graft plants or trees. It is normally done to make the plant healthier, by grafting it onto another variety of plant that is resistant to certain diseases, or to make it able to produce fruit more easily, by grafting different cultivars of fruit plants or trees together, for example. It is also possible to graft different fruit trees together, so that you can have one tree that grows a variety of fruits. You can see that being done in this video:

Graft, meaning ‘a shoot inserted into another plant,’ dates back to the late 14th century, in the form of the Middle English craffe or graffe, which later became graff before settling on graft. It came into English from the Old French graife, greffe or graffe (‘a grating or carving knife’ as well as ‘a stylus or pen’). It can be traced back to the Latin graphium (‘a stylus,’ but used figuratively in Late Latin to mean, ‘a hunting knife’) and the Ancient Greek noun γραφείον (grapheíon), meaning ‘a stylus,’ from the verb γράφειν (gráphein), meaning ‘to write’ and, ultimately, the Proto-Indo-European root gerbh- (to scratch or carve). Graft is related to the English words graphite, graphic and carve, as well as multiple words ending in –graphy, –graph and –gram, such as photography, bibliography, calligraphy  geography, telegram, diagram and program. Graft has been used in the medical sense since the mid-19th century, when this type of procedure was invented. The verb, meaning ‘to insert a shoot from one tree into another,’ dates back to the late 15th century, and comes from the noun. It has been used figuratively since the early 16th century, and like the noun, the surgical sense appeared in the mid-19th century. The slang sense for graft, meaning ‘a person’s occupation’ in UK English, dates back to the mid-19th century. It probably emerged as a figurative use of the word graft, meaning ‘ditch, moat’ or, more literally, ‘a digging,’ used in the mid-17th century, which probably came into English from the Middle Dutch graft (a digging) and graven (to dig). It can be traced back to the Proto-Indo-European root gerbh-, so in addition to being related to the English word grave, it is more distantly related to the other sense of graft, and of course all the other related terms. The slang sense ‘corruption’ also dates back to the mid-19th century, though it was first used in the US, a few years after the British slang term became popular, so most linguists believe that the American sense came from a figurative use of the British one.

See full definition
Learn more about graft in our forums

Graft in other languages