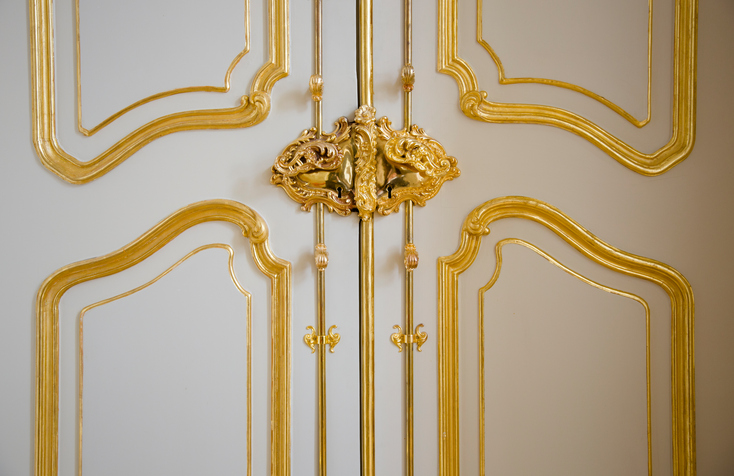 To gild means ‘to coat with gold, gold leaf, or a gold-colored substance’ and, figuratively, ‘to give a bright, pleasing, or misleading aspect to something.’ Unrelatedly, gild is a variant spelling of guild, an organization of people with related interests, goals, or jobs, formed for mutual aid or protection. In Medieval times, guilds were associations of merchants or artisans, organized to maintain standards and to protect the interests of their members; they sometimes constituted a local governing body.

gild the lily: to add unnecessary ornament to something already excellent or beautiful. Example: “The actor’s performance was sublime; had anything been added, it would have merely been gilding the lily.”

Listen to “Lilly (Are You Happy)” by Daryl Hall and John Oates here:

Listen out for the lyric “Does it only gild the lily, or does it make you happy?”

Some guilds still exist, but most no longer have the influence and importance that they did in Medieval times. Nevertheless, in some industries, it is necessary to be a member of a guild in order to be hired for certain jobs. You can read more about guilds here.

Gild dates back to before the year 900, in the form of the Old English –gyldan (to gild or cover with a thin layer of gold), but it has only been found as part of a compound, so some linguists prefer to say that the term as a stand-alone word dates back to the early 14th century, in the form of the Middle English gilden. It can be traced back to the Proto Germanic verb gulthjan, from the noun gultham (gold) and the Proto-Indo-European root ghel– (to shine). Gild is related to the Old Norse gylla (to gild) and the Old High German ubergulden (to cover with gold), as well as the Sanskrit harih (yellow) and hiranyam (gold), the Old Persian daraniya– and Avestan zaranya– (gold), the Greek khloros (greenish-yellow color), the Latin helvus (yellowish) and galbus (greenish-yellow), the German gelb and Old Norse gulr (yellow), the Old Church Slavonic zlato, Russian zoloto and Gothic gulþ (gold), as well as the English words chlorine, chlorophyll, cholera, glad, glade, glare, glee, glide, glimmer, glisten, glitter, gloss, glow, gold, melancholy and yellow, among others. The verb has been used figuratively since the late 16th century. Gild, as an alternate spelling of guild, dates back to before the year 1000 as the Old English noun gegield (brotherhood or guild). The Middle English word was shortened due to a fusion of this Old English noun with gield (service), and was spelled yilde until the 13th century, when a g replaced the y due to the influence of the Old Norse gild(e). It can be traced back to the Proto-Germanic geldja– and the Proto-Indo-European root gheldh– (to pay), because guilds are organizations that are paid into, or given a tribute or service. Guild is related to the Old Frisian geld (money), the Old Saxon geld (payment, sacrifice or reward) and the Old High German gelt (payment or tribute), as well as the Old Saxon geldan (to be worth), the Old Norse gjaldo (to repay or return), the Middle Dutch ghelden and Dutch gelden (to cost, be worth or concern), the Old High German geltan and German gelten (to be worth), and the Gothic fra-gildan (to repay), as well as the English word yield.

See full definition
Learn more about gild in our forums

Gild in other languages