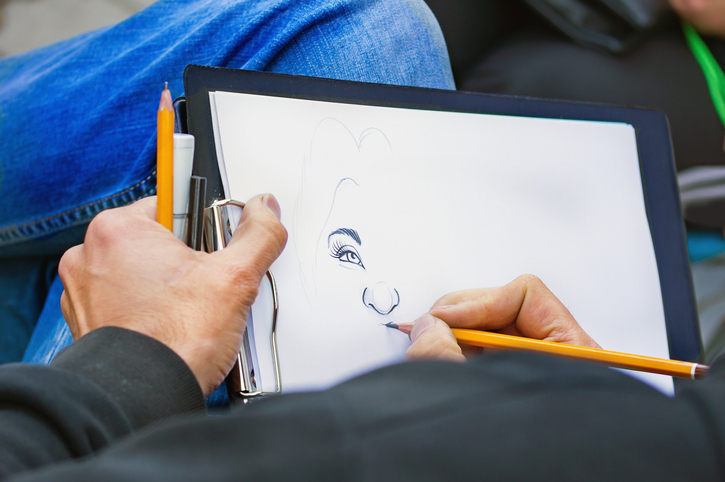 You might know that drawing is what you do when you compose a picture, but you can use it to talk about describing something in words too. It also means ‘to formulate or frame’ and ‘to derive or use.’ To drag, attract, pull out, bring or take from somewhere is also to draw. It can also mean ‘to choose by or as if by lottery’ or ‘to pick at random, as from among marked slips of paper or numbered tickets.’ In sports, to draw means ‘to finish a game with neither side winning’, and in card games, it means ‘to take a card from the pack.’ As a noun, a draw is something that attracts customers, an act of random selection, and a contest that ends in a tie.

draw on: use as a source. Example: “This article draws on rumor and gossip.”

draw up: write out formally. Example: “The lawyers are drawing up the contracts now.”

draw out: stretch out in time. Example: “The speaker didn’t have enough material and had to draw out her speech with long pauses.”

beat someone to the draw: do something faster than someone else. Example: “I was just about to suggest we take a break, when Fred suggested that very thing; he beat me to the draw.”

When talking about weapons, draw means ‘to take out for action’. Example: “The cowboy drew his gun quickly and fired.”

Quick Draw is a US TV series. You can see the trailer for it here:

Hanging, drawing, and quartering someone is a particularly nasty form of execution that was the statutory punishment for traitors in England from the 14th to the early 19th century (although the punishment was recorded in the 13th century and was not fully used after the 17th century). Traitors would be hanged until they were nearly dead, then cut down and emasculated (that means their genitals were cut off), disembowelled (cut open and their intestines pulled out—that’s what drawing means in this sense), and then their heads were cut off and their bodies cut into four pieces (or: quartered). Perhaps most famously, it was the punishment given to Guy Fawkes, leader of the gunpowder plot to blow up the Houses of Parliament in 1605.

Draw, meaning ‘to give motion by pulling,’ dates back to before the year 900, in the form of the Old English verb dragan (later the Middle English drauen or drawen). It can be traced back to the Proto-Germanic draganan (to draw or pull) and the Proto-Indo-European root dhregh– (to draw or drag on the ground). Draw is related to the Old Norse draga (to draw, drag or pull), the Old Saxon dragan (to carry), the Old Frisian drega, draga and Middle Dutch draghen (to carry, bring or throw), the Old High German tragan (to carry, bring or lead) and the German tragen “(to carry or bear), as well as the Sanskrit dhrajati (pulls, slides in), the Russian drogi (wagon) and doroga (way), the Latin trahere (to draw), the Spanish traer (to bring), the Portuguese trazer (to bring), and the English word drag. The most common sense nowadays (to make a line or figure) was originally figurative, based on the image of dragging a pencil along paper, and first appeared around the year 1200. The sense ‘to pull out a weapon for use’ dates back to the late 12th century, and was originally about swords, while draw as a form of execution was first used in around the year 1300, as was ‘to select (one or several) from a number of lots.’ The sense ‘to attract’ is from the late 16th century, and, in card playing, draw was first used to mean ‘to take or receive a card’ in the mid-18th century. The noun, meaning ‘the act of pulling,’ comes from the verb, and dates back to around the year 1400. The colloquial sense, ‘something that can attract a crowd’ dates back to the early 19th century. The sense ‘a game that ends without a winner, and is therefore a tie,’ dates back to the early 17th century, and is thought to have come from withdraw. The verb sense, ‘to leave a game undecided,’ came from this use of the noun, and appeared in the late 19th century.

See full definition
Learn more about draw in our forums

Draw in other languages