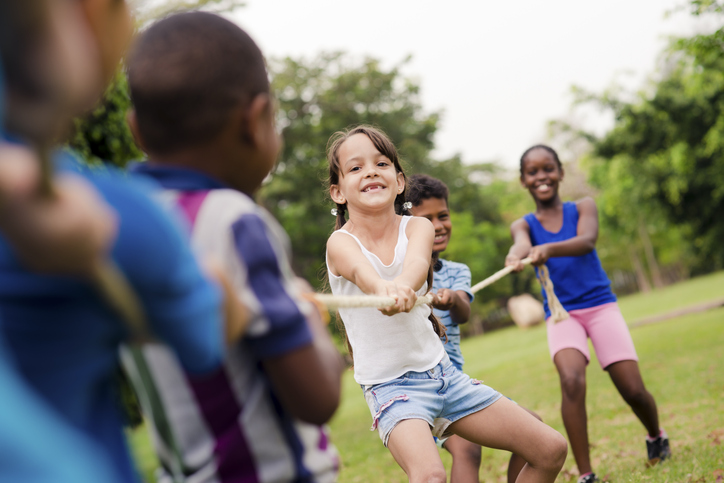 To tug means ‘to pull at with force or effort’ and also ‘to drag or haul.’ As a nautical term, tug means ‘to tow a vessel with a tugboat,’ which is a small, powerful boat specifically used for towing or pushing ships. The noun tug can be short for tugboat, and its also an act or instance of tugging. A contest between opposing forces, groups, or people is also a tug.

A tug of war is a contest of strength where two teams pull on opposite ends of a rope. The first team to pull the rope a certain distance in its direction wins.

Tug, meaning ‘to pull at something with force,’ dates back to the late 12th century, as the Middle English verb toggen, which meant ‘to play-wrestly’ or ‘to contend,’ which evolved from the Old English verb teohan (to pull), and is related to another Old English verb, togian (to tow). It can be traced back to the Proto-Germanic tugojannan (to pull), from the Proto-Indo-European root deuk– (to lead). Tug is related to the Old High German zucchen (to pull or jerk) and the German zücken (to draw quickly), as well as the Latin dux, ducis (‘leader or commander’ as well as ‘governor of a province’) and ducere (to lead), the German Zaum (bridle), the Middle Welsh dygaf (I draw), and many English words, including abduce, abduct, conduct, conductor, deduction, dock, douche, ducat, duchess, duchy, duct, ductile, duke, education, induce, introduce, introduction, misconduct, produce, production, reduce, seduction, taut, team, teem, tie and tow. The noun, meaning ‘some parts of a harness,’ first appeared in the mid-14th century, and comes from the verb. The more common sense, ‘the act of pulling,’ dates back to around the year 1500. The sense of ‘a small, powerful vessel for pulling other vessels’ (most commonly a boat) dates back to the early 19th century. The phrase tug of war has been used since the mid-17th century. It was originally figurative, meaning ‘a strenuous contest of forces,’ and only became a literal sport in the late 19th century.

See full definition
Learn more about tug in our forums

Tug in other languages

Intermediate+ Word of the Day: drape