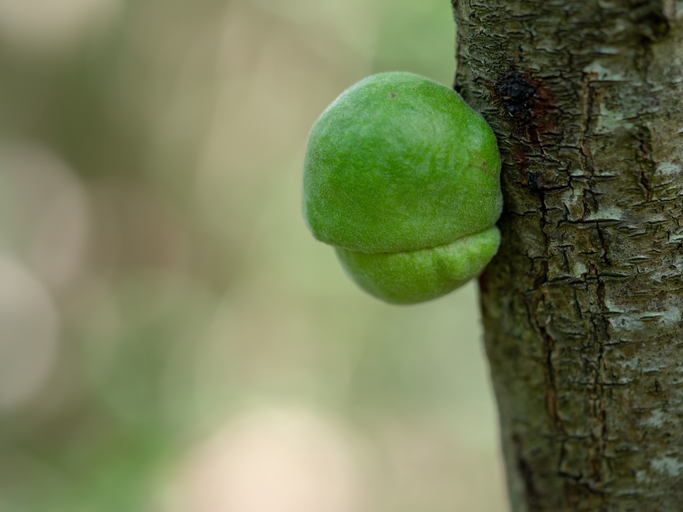 Gall is a word with multiple meanings. As a noun, gall is another word for bile, a bitter yellow or greenish liquid produced by the liver, that aids in digestion of fats. Informally, it means ‘nerve,’ as in rude boldness. As a verb, to gall means ‘to make sore by rubbing,’ especially if we are talking about animals, and, figuratively, ‘to annoy greatly.’ The related noun gall is a sore on the skin made by rubbing, especially on horses. Something very irritating is also a gall.

The Holly and the Ivy is a traditional Christmas Carol. You can hear it being sung here by the Mediaeval Baebes. Listen out for the lyric “The holly bears a bark as bitter as any gall.”

As a noun, gall is also an abnormal growth on a plant or tree.

Gall meaning bile is now mainly used when we are talking about animals. For humans, it is now only really used in compounds like gall bladder, which is a pouch or sac attached to the liver where bile is stored, or gallstones, which are hard masses that form in the gall bladder.

Gall, meaning ‘bile,’ dates back to before the year 900, in the form of the Old English noun galla or gealla (Middle English galle). It can be traced back to the Proto-Germanic gallon (bile) and the proto-Indo-European root ghel– (to shine), and is related to the Old Norse gall (gall or bile,’ and ‘sour drink’), the Old Saxon galle, the Old High German galla and the German Galle (all meaning ‘bile’), as well as the Sanskrit harih (yellow) and hiranyam (gold), the Avestan zari (yellow), the Old Persian daraniya– and Avestan zaranya– (gold), the Greek khloros (greenish-yellow color) and kholos (‘bile or gall’ or ‘wrath’), the Latin helvus (yellowish), the Lithuanian geltonas (yellow), the Old Church Slavonic zlutu, Polish żółty and Russian zeltyj (yellow), the Latin galbus (greenish-yellow) and fellis (bile or gall), the Lithuanian žalias (green), želvas (greenish) and tulžis (bile), the Old Church Slavonic zelenu, Polish zielony and Russian zelenyj (green), the Old Irish glass and Welsh and Breton glas (green), the German gelb and the Old Norse gulr (yellow), the Old Church Slavonic zlato, Russian zoloto and Gothic gulþ (gold), as well as many English words, including arsenic, chloral, chrotic, chlorine, chloroform, chlorophyll, cholera, cholesterol, gild, glad, glance, glare, glass, glaze, gleam, glee, glib, glide, glimmer, glimpse, glint, glisten, glitch, glitter, gloat, gloss, glow, glower, gold, jaundice, melancholy and yellow. The figurative sense ‘rancor or embittered spirit’ dates back to around the year 1200, but the more common figurative sense today, ‘boldness or impudence’ was first used in the late 19th century in the US. The sense ‘sore on the skin caused by chafing’ also dates back to before the year 900, as the Old English gaella, and comes from the same origin described above. Gall, meaning ‘a lump on a plant caused by insect egg deposits,’ dates back to the late 14th century, and can be traced back to the Latin galla (oak-gall), from the same root as the other meanings.The verb gall, meaning ‘to make sore by chafing,’ dates back to the mid-14th century, and comes from the related noun sense.

See full definition
Learn more about gall in our forums

Gall in other languages