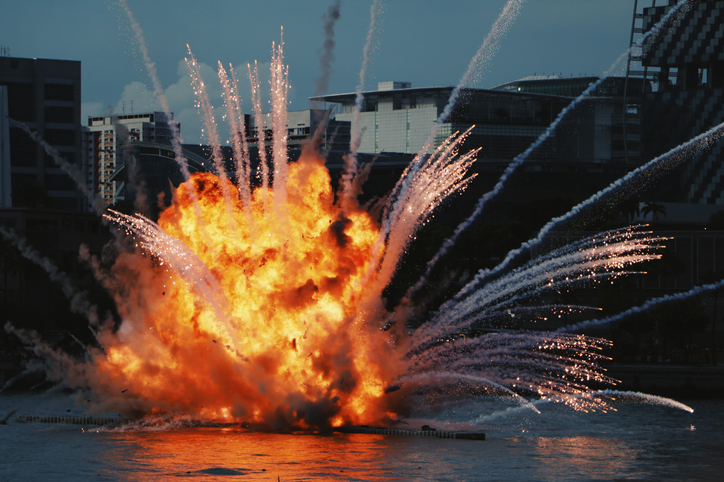 To boom is ‘to make a deep, echoing sound,’ or ‘to announce or say with an echoing sound or voice.’ ‘To progress or increase quickly and strongly’ is also to boom, and that’s why the related noun boom is a rapid increase in growth or sales and also a period of rapid economic growth. A deep, long, echoing sound is also a boom. Unrelatedly, a boom is a pole sticking out from a ship’s mast and used to extend sails and also a chain, cable, or anything that serves to block the passage of ships. In filmmaking, a boom is a long pole for holding and moving a microphone or camera.

lower the boom (US): punish wrongdoing. Example: “The police have lowered the boom on the drug dealers.”

boom box: a large, portable stereo player. Example: “Young men were often seen around the city carrying boom boxes on their shoulders and playing loud music in the 1980s.”

A boom is also a long pole, specifically ‘a long spar run out from a ship.’ In fact, this is where the film sense comes from.

A baby boom is a period with a high birth rate. Probably the most well-known baby boom is the one that took place in the mid-twentieth century, especially in the years following the Second World War. People who were born during this period are known as baby boomers.

Boom, meaning ‘to make a deep, echoing sound,’ dates back to the early 15th century, in the form of the late Middle English verb bomben or bummyn, which originally meant ‘to make a deep, hollow, continuous sound’ or ‘to buzz, hum or drone,’ was first used for the sound bees and wasps make, and probably originated from an imitation of the sound, either in English, or in an earlier (now lost) Germanic variant. It is related to the Dutch bommen and the German bummen, as well as the English word bomb. The sense we now recognize, ‘a loud, deep sound,’ first appeared in the mid-15th century, and had become the most common sense by the 17th century. The figurative sense, ‘to suddenly burst into prosperity’ is from the late 19th century. The noun, meaning ‘a loud, deep, hollow, continuous sound,’ comes from the verb, and dates back to around the year 1500. The sense ‘a sudden burst or activity’ dates back to the late 19th century, appearing shortly after the related verb sense. The noun, meaning ‘a long spar run out from a ship,’ is unrelated. It dates back to the mid-17th century, and evolved in English from the Scottish baun, which was in turn borrowed from the Dutch boom (a tree, pole or beam). It can be traced back to the Proto-Germanic baumaz (a tree), and the Proto-Indo-European bheue– (to be, exist or grow). Boom is related to the Old Frisian bam (tree, gallows or beam), the Old High German boum and German Baum (tree), and the Old Norse baðmr and Gothic bagms (tree), as well as the Greek phyein (to bring forth or make grow) and phytos, phyton (a plant), and English words including be, beam, boor, booth, bound, bower, bowery, busk, bustle and even husband. The sense ‘a movable pole for a microphone or camera’ was first used in the 1930s.