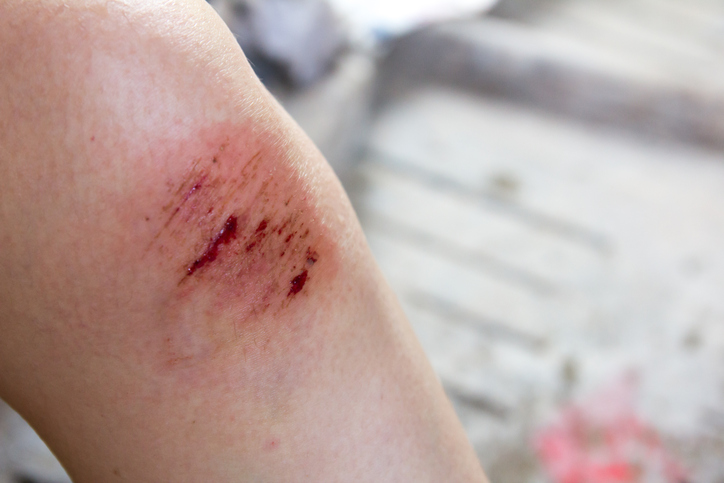 You might know already that sore means ‘physically painful’ and that we use it to talk about body parts or wounds. If we say a person is sore, we mean he or she is suffering bodily pain, but sore can also sometimes be used about someone suffering mental distress (usually now in expressions like “sore at heart” or in combined forms like “heartsore”). We can also use sore to talk about something that causes hardship or suffering or something that causes irritation or annoyance. Informally, in US English someone who is annoyed or irritated is sore. As a noun, a sore is an irritated or infected spot on the body that is painful.

Sore is mainly used to talk about stinging or burning pains, like the kind of pains you get with cuts or grazes or with inflammation or irritation, like a sore throat. It can also be used for pains to do with stiffness, like when your muscles are hurting after exercise, although we may also say that our muscles are aching. An ache is usually a dull pain that goes on for a long time, like a headache or a stomachache.

Sore dates back to before the year 900, in the form of the Old (and Middle) English sār, originally meaning ‘painful, aching, grievous, sad or wounding.’ Like most Old English adjectives, it was also used as an adverb. It can be traced back to the Proto-Germanic saira- (suffering, sick or ill), though its meaning was also influenced by the Old Norse sarr, meaning ‘sore or wounded,’ (which itself came from the Proto-Germanic) and the Proto-Indo-European root sai– (suffering). It is related to the Old Frisian sar (painful), the Middle Dutch seer and Dutch zeer (sore or ache), the Old High German ser (painful) and the Gothic sair (pain, sorrow or travail), as well as the Old Irish saeth (pain or sickness) and the English words sorrow and sorry. As a noun, sore also dates back to before the year 900, because the Old English sār was also used as a noun meaning ‘bodily pain,’ ‘injury or wound,’ sickness or disease’ or ‘pain or suffering.’ Though they are identical, linguists believe, based on frequency of its use in texts, that the noun appeared slightly after the adjective and probably came from it. The many senses it had in Old and Middle English were slowly replaced by other, more specific words, leaving the noun sore only the meaning of ‘ulcer, boil or blister‘ in the English we use today.

See full definition
Learn more about sore in our forums

Sore in other languages