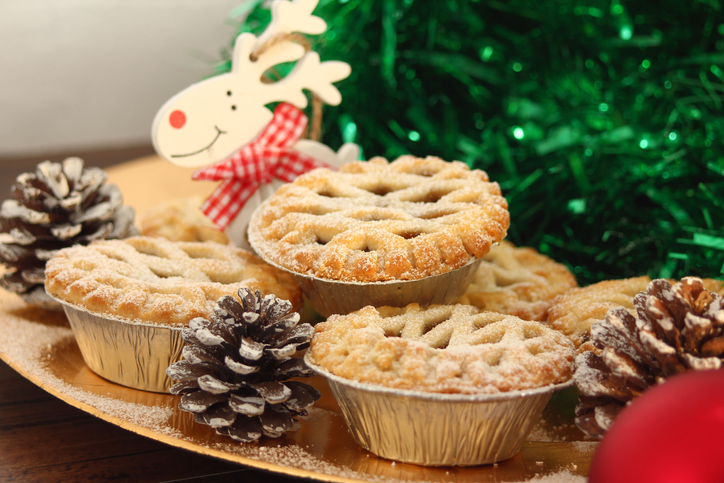 mince words, mince your words: be polite and tactful. This is most often used in the negative, to mean ‘to speak frankly, in a forthright manner.’ Example: “That journalist doesn’t mince her words; she says exactly what she thinks of people.”

Listen to T. Rex singing “Baby Boomerang” here. Listen out for the lyric “Mince pie, dog-eye, eagle on the wind.”

In the US, minced meat is more often called ground meat and people talk about grinding meat more commonly than they do about mincing meat. The opposite is true in the UK.

Mince pies are a traditional Christmas treat in the UK. They are small, individual pies, filled with mincemeat, which is a mixture of dried fruit, suet (a hard, white animal fat), and spices. Mincemeat can also be an alternative term for minced meat, but because that can be confusing, most people use mincemeat for the pie filling and minced meat when they are talking about finely chopped meat. If you would like to try making your own mince pies, you could try this recipe. Mince pies is also Cockney rhyming slang for “eyes.”

Mince, meaning ‘to chop into little pieces,’ dates back to the late 14th century, in the form of the Middle English verb mincen. It came into English from the Middle French minc(i)er, and can be traced back to the Late Latin verb minutiare (to make small), and noun minutiæ (small bits), from the Latin minutus (small) and the Proto-Indo-European root mei– (small). Mince is, therefore, related to the Spanish minucia and Portuguese minúcia and French minutie (small bit), as well as the Sanskrit miyate (diminishes or declines), the Greek meion (less or smaller), the Latin minus, minor (smaller) and minuere (to diminish, reduce or lessen), the Russian men’she (less), and English words such as administer, administration, diminish, menu, minimum, minister, minor, minus, minute and mystery. Mince has been used about speech, meaning ‘to clip words imitating elegance,’ since the mid-16th century, and this sense led to the figurative idea of ‘restraining speech in the interest of decorum’ found in the expression mince words. The noun mince, short for ‘mincemeat,’ dates back to the mid-19th century. Mincemeat dates back to the mid-17th century, and comes from the verb mince.

See full definition
Learn more about mince in our forums

Mince in other languages