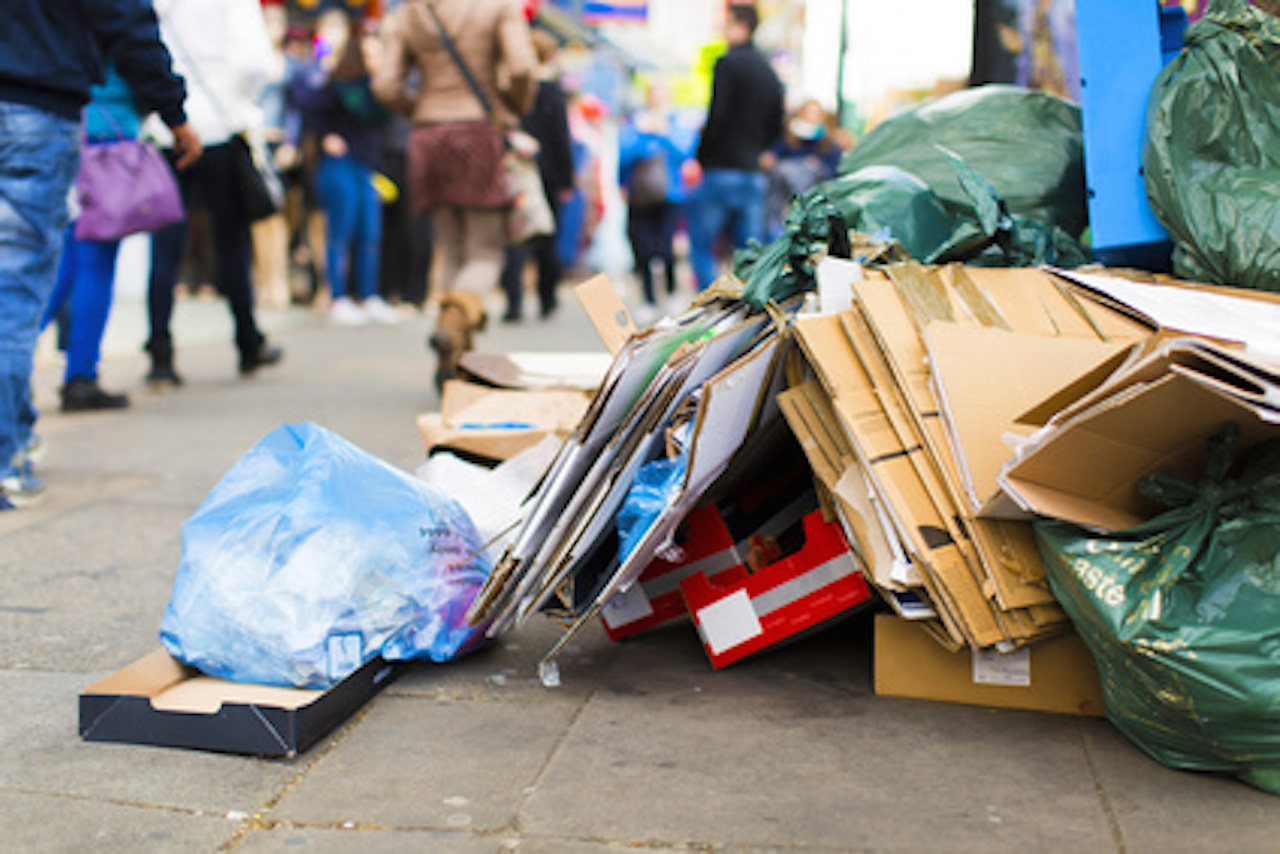 Litter is a mass noun that describes paper, cans, or general garbage that people throw in the street or any other public space. If we say “a litter of something,” we mean that a space is covered with untidy objects. As a verb, litter means ‘to throw garbage in the street’ and also ‘to leave objects lying around in a disorganized way.’

cat litter: absorbent material that cats use to urinate and defecate at home. Example: “Felix used the cat litter this morning after his breakfast.”

litter box (US), litter tray (UK): the container where you put cat litter. Example: “We put the litter box on the porch.”

litter bin (UK): a small trash can in public spaces. Example: “Would you empty the litter bin? They’re picking up the rubbish in the morning.”

A litter is also a group of animals born at the same time. Example: “Bella had a litter of six puppies this morning.”

Pick of the Litter is a documentary film about training puppies to become guide dogs for the blind. You can see the movie trailer here:

Litter refers to objects that have not been disposed of properly. Items that have been put in the appropriate place for collection would be called rubbish in the UK or trash or garbage in the US.

Litter dates back to the late 13th century, as the Middle English litere, which originally meant ‘a bed’ or ‘a bed-like vehicle carried on men’s shoulders.’ It came into English from the Anglo-French litere (portable bed) and the Old French litiere (‘litter or stretches,’ as well as ‘straw or bedding’). It can be traced back to the Medieval Latin lectaria (litter) and the Latin lectus (bed, lounge, sofa or dining couch) from the Proto-Indo-European root legh– (to lie down or lay). Litter is related to the Greek lekhesthai (to lie down), legos (bed), lokhos (lying in wait or ambush), alokhos (bedfellow or wife), the Old Church Slavonic lego (to lie down), the Lithuanian at-lagai (fallow land), the Old Irish laigim (I lie down), the Irish luighe (‘couch’ or ‘grave’), the French lit (bed), and English words such as allay, bylaw, coverlet, fellow, lager, lair, law, lawyer, lay, ledge, ledger, lie, low and outlaw. The sense extended in the 15th century to ‘the straw used for bedding,’ and in the late 15th century, to the figurative sense ‘the offspring of one animal at one time’ (in other words, in one bed). By the 18th century, litter was still being used to mean ‘straw used for bedding,’ but mostly for animals, and it was also ‘the animal waste found in this straw.’ It was this sense that evolved to ‘scattered debris,’ which first appeared in the mid-18th century, and became the most common sense in the 19th century. The verb, originally meaning ‘to provide with bedding,’ dates back to the late 14th century, and comes from the noun. Its sense evolved along with the noun’s, so that the meaning (only used of animals, and now rare) ‘to give birth’ appeared in the late 15th century, and ‘to strew with debris’ or ‘to scatter in a disorderly way’ date back to the mid-18th century.

See full definition
Learn more about litter in our forums

Litter in other languages