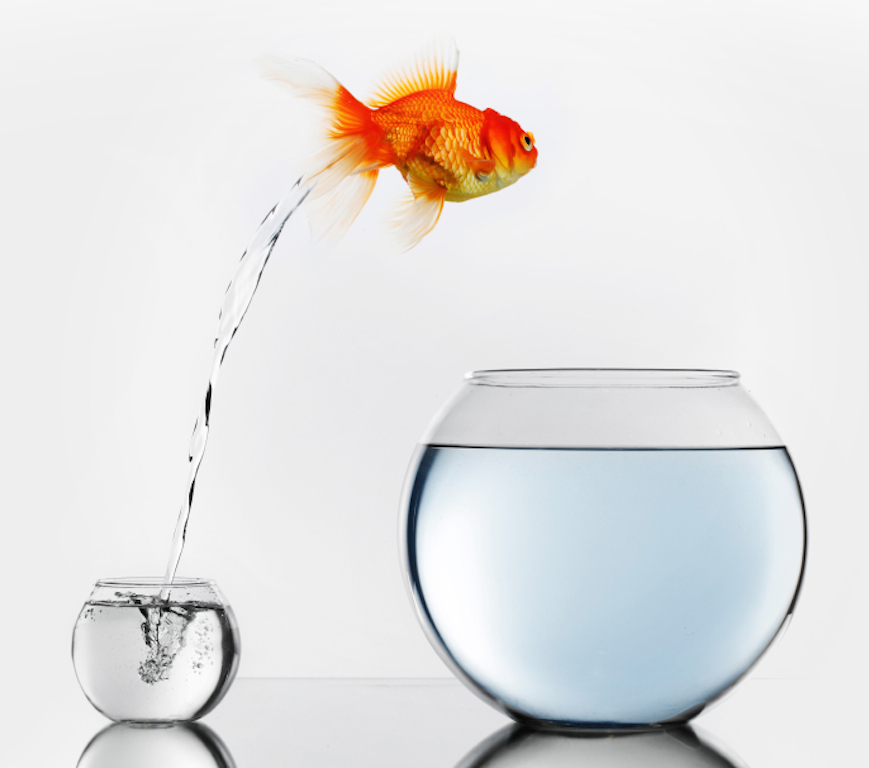 You might already know that a fish is a cold blooded animal that lives in water and also the flesh of this animal when used as food. Remember that the plural form of fish is also fish, when considered as a group, although it can be fishes, especially when talking about different types of fish. As a verb, to fish means ‘to catch or try to catch a fish from the water,’ but informally, it also means ‘to try to find something out in a subtle way.’ To fish also means ‘to try to find an object and pull it out of a container, like a bag or a drawer.’

big fish: someone important and powerful. Example: “Partha is a big fish in the field of neuroscience.”

Fish is the stage name of Scottish singer-songwriter Derek William Dick. He is most famous for having been the lead singer of the British band Marillion in the 1980s. You can listen to Fish and Marillion performing one of the band’s most popular songs, “Kayleigh,” and watch the video here:

The related adjective fishy means ‘fish-like,’ but is used informally to mean that something seems suspicious. No one is quite sure why, but it is thought it may refer to fish as being slippery creatures, which are difficult to get hold of properly, or to meat that tastes a bit like fish and might have gone bad. Example: “Those two are always whispering together in corners; I’m sure there is something fishy going on.”

Another related word is phishing, which has developed from the verb meaning of trying to find something out. Phishing is an email scam where the sender tries to get you to reveal information—usually your bank details—by tricking you into thinking they are someone else—like your bank—or that you have won a prize or something similar.

Fish, meaning ‘vertebrate with gills and fins that lives in the water,’ dates back to before the year 900, as the Old English noun fisc (pronounced “fish”), and later the Middle English fisch or fyssh (both also pronounced “fish”). It can be traced back to the Proto-Germanic fiskaz and the Proto-Indo-European root pisk– (fish). Fish is related to the Old Saxon, Old Frisian and Old High German fisc, the Old Norse fiskr, the Middle Dutch visc, the Dutch vis, the German Fisch and the Gothic fisks (all meaning fish), as well as the Latin piscis (fish), the Old Irish iasc (fish), and the Italian pesce, French poisson, Spanish pez, Welsh pysgodyn, Breton pesk, among other words meaning fish in different languages. It is also related to the English words fishnet, grampus, piscatory, Piscis, piscine and porpoise. Fish has been used colloquially to mean ‘any animal that lives in water’ since before the year 900, which is why we use words like shellfish and starfish to refer to other sea creatures. Formally, the plural for fish was fishes, but fish was often used when talking about fish meat used as food, and that plural use spread to a collective noun meaning ‘a group of fish,’ so now, both plurals are correct, though fish is more commonly used except when there are several types of fishes. The expression ‘a fish out of water’ first appeared in the early 17th century. Fish, as a verb meaning ‘to fish’ or ‘to try to catch a fish,’ also dates back to before the year 900, as the Old English verb fiscian (Middle English fis(c)hen), from the same origin as the noun. The wider sense, ‘to try to pull something out of a container,’ dates back to the 16th century, while ‘to try to find out something in a subtle way’ was first used in the mid-17th century.

See full definition
Learn more about fish in our forums

Fish in other languages