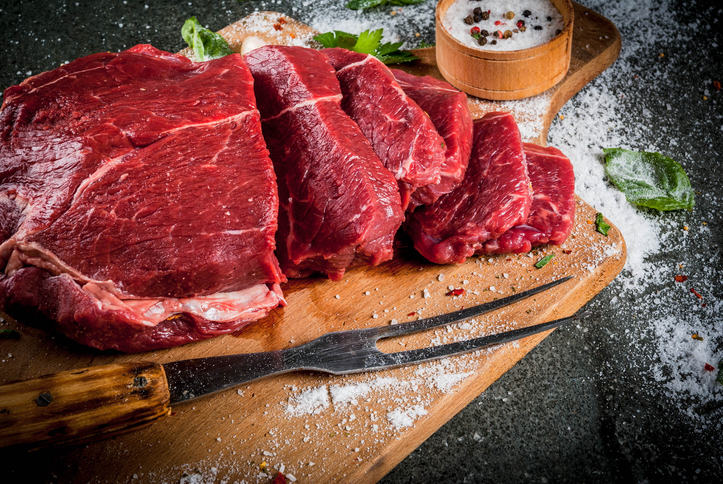 You might already know that flesh is the soft substance of an animal or human body, between the skin and the skeleton. This substance, used as food, is also called flesh, although it is most commonly known as meat. Figuratively, the body can be called the flesh, especially when distinguishing it from the soul or the spirit, and humankind can also be called flesh. In botany, the flesh is the soft, pulpy portion of a fruit or vegetable.

flesh out: to become more fleshy. Example: “Henry was very thin as a teenager, but he’s fleshed out as he’s grown older.”

flesh something out: to make more substantial. Example: “This is quite a good report, but you need to flesh it out with some more facts and figures.”

in the flesh: physically present. Example: “That actor is even more beautiful in the flesh.”

Flesh dates back to before the year 900. The Old English noun flǣsc (Middle English flesc) could mean ‘flesh,’ ‘meat,’ ‘the muscular parts of animal’s bodies,’ ‘the body’ (as opposed to the soul), ‘living creatures’ and ‘close relatives.’ It can be traced back to the Proto-Germanic flaiska- or flaiski– Its origin before then is uncertain, though some linguists cite an ancient sense, ‘piece of flesh torn off,’ as a clue for its possible origin in the Proto-Indo-European root pleik– (to tear), but other linguists are skeptical. It is related to the Old Frisian flesk, the Middle Low German vlees and the German Fleisch (all meaning ‘flesh’), as well as the Old Norse flesk (pork or bacon). All the senses from Old English have remained in use, though some, like ‘the physical body as opposed to the soul or spirit,’ are mainly used in literary or religious contexts, except for the sense ‘close relatives,’ which we usually only find in the expression ‘your flesh and blood’ these days. Flesh has also been used (originally figuratively) to describe the edible part of fruit since the mid-16th century. Flesh has been used as a verb since the early 17th century. The verb comes from the noun, and originally meant ‘to make a hunting animal eager for prey by giving it flesh from its kill,’ and later ‘to embody with flesh.’ These senses are no longer in use, but we see a trace of the latter in the verbal phrase flesh out.

See full definition
Learn more about flesh in our forums

Flesh in other languages