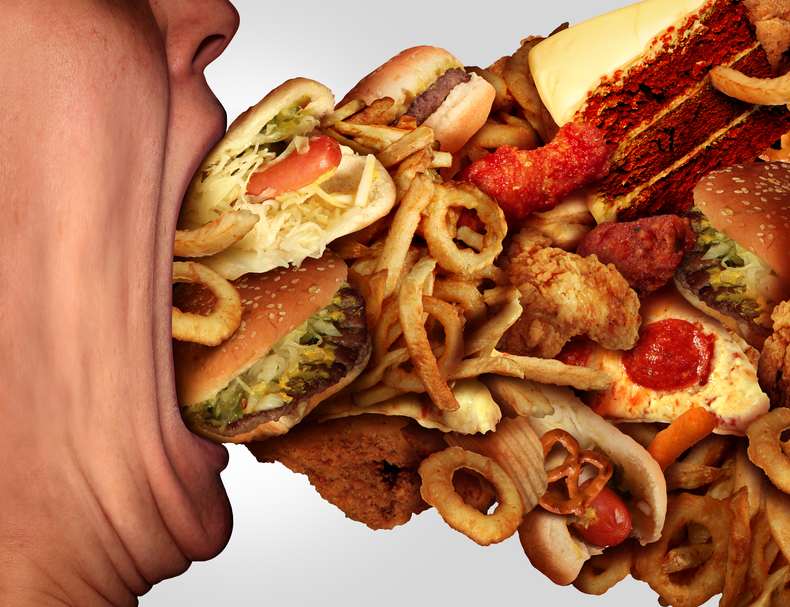 It's not a good idea to binge on junk food too often.

A binge is a period of excessive indulgence when someone eats or drinks a lot. It can also refer to any other activity done excessively. As a verb, binge means ‘to consume too much food or drink’ or ‘to do something in great amounts and excessively.’ This is an informal term used both in US and UK English.

binge drinking (noun), binge drink (verb): drinking excessive amounts of alcohol in a short period of time. Example: “College students often binge drink; they don’t drink during the week, but they get very, very drunk over the weekend.” “Health experts are gravely concerned about the rise in binge drinking.”

binge-watch (verb): to watch a lot of episodes of a TV show in one sitting. Example: “I don’t have much time to watch TV usually, so, when I do have time off, I often binge-watch the whole season of a show over a couple of days.”

Binge doesn’t need to take an object, but when it does it is used with the preposition on. Example: “I try to eat healthily, but I have a sweet tooth and, every now and then, I binge on chocolate.”

Binge, both as a noun meaning ‘a drinking bout’ and as a verb meaning ‘to drink heavily,’ dates back to the mid-19th century. Its exact origin is uncertain, but linguists believe it probably evolved from the dialectal verb binge (‘to soak,’ usually said of a wooden container that was put in water so it would swell, and could then be used to keep liquids without leaking) used in Leicestershire, in the north of England throughout the 19th century. This verb started to be used figuratively in the local dialect in reference to drinking before it (with its accompanying noun) became more widely used. The sense extended in the early 20th century, around the time of World War I, to include ‘eating excessively’ or ‘a bout of eating.’ Its use extended to excesses of other types in the late 20th century.

See full definition
Learn more about binge in our forums

Binge in other languages