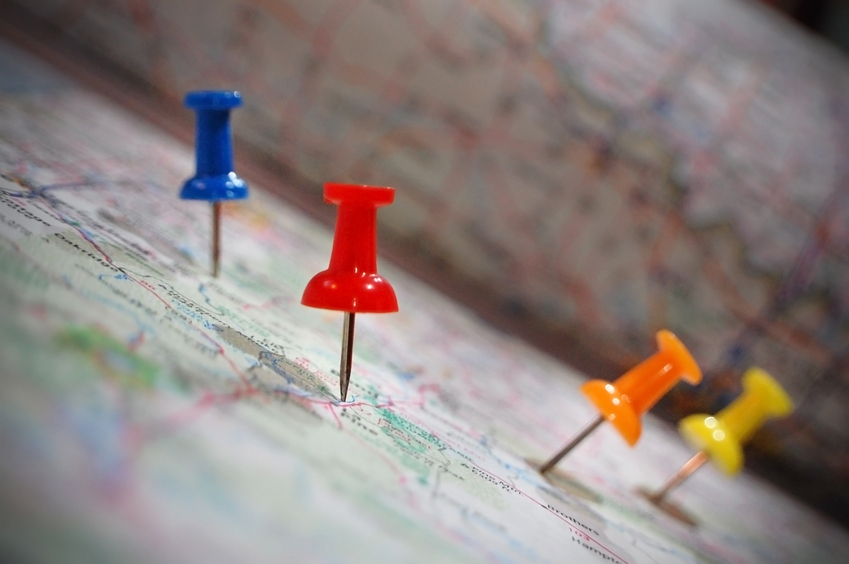 Some people put thumbtacks in maps to show where they have traveled.

A tack is a short nail with a large flat head, as well as a long stitch used to fasten fabric before sewing. It is also a course of action and, more specifically, the direction a boat takes when it sails against the wind at an angle. To tack means ‘to fasten or close with tacks’ or, more generally, ‘to attach as something extra’ (often with the preposition onto or adverb on) or ‘to secure before sewing.’ Tack also means ‘to change direction when sailing.’

Tacky is a very common word. It means that something is in poor taste. In this parody of the song “Happy” by Pharrell Williams, famed comedic songwriter “Weird Al” Yankovic sings about common habits that he finds tacky.

Tack is also the equipment used for horseback riding, including saddle, bridle, martingale, etc. and to tack up means ‘to put a saddle and bridle on a horse ready to ride it.’ (The saddle is the thing that you sit on when you ride a horse, and the bridle is the thing that goes around the horse’s head and that is connected to a part you hold with your hands to control the horse.)

Colloquially, in UK English, tack is also an uncountable noun meaning ‘a thing or things that are cheap and trashy.’ So, you might say to someone, “I went to the flea market hoping to find some bargains, but it was just a load of old tack and so I didn’t buy anything.”

Tack dates back to the early 14th century; the Middle English noun takl (later, tack), meant ‘buckle,’ ‘clasp,’ or ‘nail.’ It is related to the German Zacke, meaning ‘prong’ and the Dutch tak, ‘twig.’ The verb comes from the noun and appeared in the late 14th century, as the Middle English tacken, ‘to attach.’ In the 15th century, the noun was also used to mean ‘the rope holding a ship’s sail,’ and this is where the verb related to sailing comes from; it first appeared in the mid-16th century.

See full definition
Learn more about tack in our forums

Tack in other languages