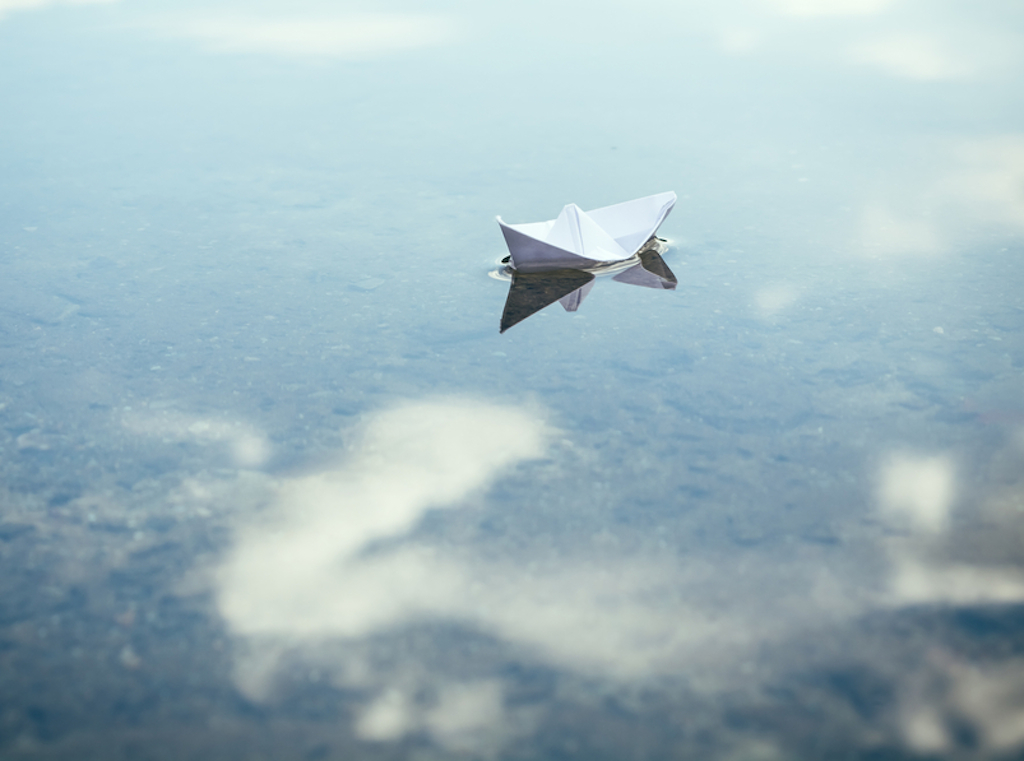 A paper boat drifting along a river

To drift means ‘to carry or to be carried along by a current of water or air’ and, in reference to snow, it means ‘to be driven into heaps.’ Figuratively, it means ‘to be carried along by circumstances.’ To drift also means ‘to walk without aim’ or, in reference to someone’s mind or attention, ‘to lose concentration.’ A drift is a driving movement, as of a current of water, and also a heap, or big pile, of something, usually snow. Drift is also a synonym for ‘tendency’ and for ‘meaning’ or ‘aim.’

get (or catch) someone’s drift: understand what someone means. Example: “Oh, I thought you were talking about downhill skiing, but you mean cross-country skiing. Now I get your drift!”

drift apart: of romantic couples or friends, to gradually lose the connection that cemented the relationship. Example: “Tim and Ian realized their relationship was over; they had been drifting apart for years.”

Listen to the Kinks with their song “Drift Away” here:

In astronomy, a drift is also a group of stars that seem to be moving toward a point in the sky, though this meaning is sometimes considered antiquated these days.

Drift dates back to the late 13th or early 14th century, and literally meant ‘a being driven,’ but most commonly understood, then as now, as ‘a driving movement’ or ‘anything being driven,’ and was most commonly used to refer to rain or snow. Its origin is uncertain. Some linguists think that it evolved from the Old English verb drīfan (drive), while others suggest that it may have come into English from the Old Norse drift (snow drift) or the Middle Dutch drift (drove or flock). It’s also possible for either of these to have influenced the evolution and use of drift in English, so all these options may be true in a sense. The Old English verb drīfan can be traced back to the Proto-Germanic dreibanan and the Proto-Indo-European root dreihb– (to drive or push), while the Old Norse and Middle Dutch words come from the Proto-Germanic driftiz, from the same PIE root. If drift evolved from the Old English drīfan, it is related to the Old Frisian driva (I lead, impel, or drive away), the Old Saxon driban, the Dutch drijven, the Old High German triban, the German treiben, the Old Norse drifa and the Gothic dreiban (all meaning ‘to drive’); if it came from the Old Norse or Middle Dutch, it is related to the Danish and Swedish drift, and the German Trift. It is, either way, related to the English word drive. The figurative sense, ‘aim, intention or meaning,’ was first used in the early 16th century. The sailing sense, ‘deviation of a ship from its course due to currents,’ first appeared in the late 17th century, and its use expanded to include anything deviating off course in the 18th century. The automobile sense dates back to the 1950s. The verb, meaning ‘to float or be driven by a current,’ dates back to the late 16th century, and comes from the noun. The transitive sense, ‘to drive in piles,’ was first used in the early 17th century, while the figurative sense, ‘to move or be passive or listless,’ dates back to the 19th century. The expression drift apart is from the mid-19th century.

See full definition
Learn more about drift in our forums

Drift in other languages