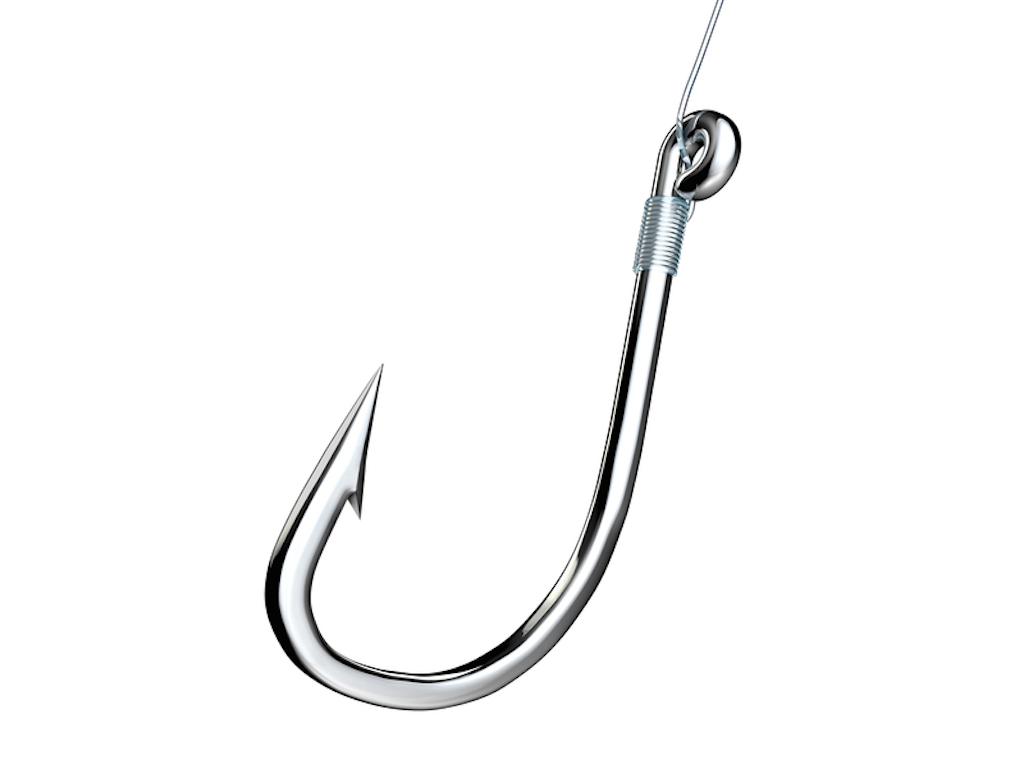 A hook is a curved piece of metal or wood, used for holding something, and, in particular, the metal piece at the end of a fishing line. Figuratively, hook is any sort of trap and anything that catches someone’s attention. In boxing it is also a punch, or hit, with a bent elbow. To hook means ‘to curve like a hook’ or ‘to catch something with or as if with a hook’ and informally, it means ‘to steal something secretly.’

on the hook: figuratively, to be caught or ensnared by someone or something. Example: “Robert is a real smooth-talker and he’s certainly got Angela on the hook.”

off the hook: out of a difficult situation. Example: “The boss thought my mistake had been made by another employee who had already left the firm, which let me off the hook!”

hook up (slang): to become romantically involved with or have a brief sexual relationship with. Example: “Did you hear that Marie and Tony hooked up last week? I don’t think they have any plans to become a couple though!” “Jane and her husband hooked up in high school and they’ve been together ever since.” In the sexual sense, hook up can actually be very vague and can have a very range of meanings, from kissing to sexual intercourse.

Captain Hook is the pirate captain in Peter Pan. You can see him in action in this clip from the Disney animated movie version of the book:

As a verb, usually used in the passive, hook can also mean ‘to make someone addicted to drugs’ or, by extension, it can refer to any other thing or activity that someone enjoys to an extent that other people might think is excessive. Example: “The dealer hooked Anne on heroin.” “Simon is hooked on that new TV show; he can’t stop watching it and when he’s not watching it, he’s talking about it!”

Hook, meaning ‘a bent piece of metal or other material used to catch or hold something,’ dates back to before the year 900, as the Old English noun hoc (Middle English hoke). It is probably related to another Old English word, haca (bolt), and can be traced back to the Proto-Germanic hokaz or hakan and the Proto-Indo-European root keg– (hook or tooth). Hook is related to the Old Frisian hok and the Middle Dutch hoek (a hook), the Dutch haak (a hook, angle, corner or projecting piece of land) and the German Haken (hook), as well as the Russian kogot (claw) and the English words hack, hake and heckle. The figurative sense, ‘something that catches or ensnares,’ first appeared in the early 15th century, while the meaning ‘a projecting piece of land’ has been used since the mid-17th century, probably reinforced by the Dutch word, which already had that sense. The boxing sense is from the late 19th century. The expression by hook or by crook was first used in the late 14th century, and was probably a reference to the tools used by professional thieves. The verb, meaning ‘to bend like a hook,’ comes from the noun, and dates back to around the year 1200. The transitive form (to bend something like a hook) appeared in the early 15th century. The more specific sense, ‘to catch something (usually a fish) with a hook’ dates back to around the year 1300, while ‘to fasten with hooks’ is from the early 17th century. The figurative sense, ‘to trap or catch using tricks,’ was first used around the year 1800.

See full definition
Learn more about hook in our forums

Hook in other languages