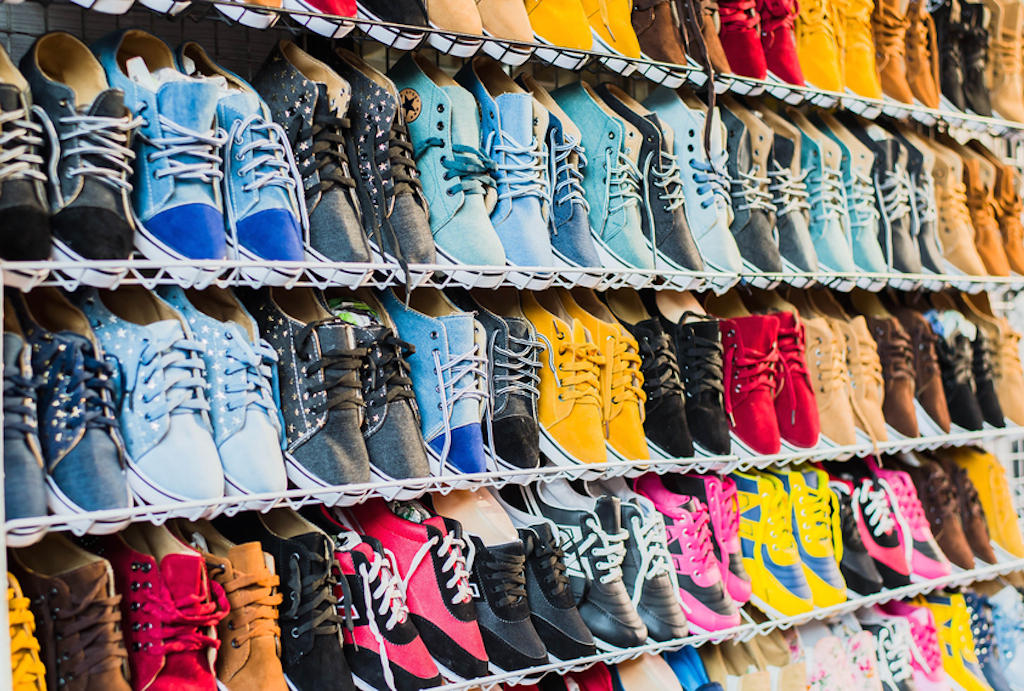 A rack of shoes

Most commonly, a rack is a fixture used for storage, usually attached to a wall and with many shelves, or a framework of bars or pegs where things are arranged or hung. Historically, a rack was a torture instrument. Nowadays, a rack is also a slang term used in the US to refer to a woman’s breasts. As a verb, to rack means ‘to torture or torment someone’ or ‘to strain both physically and mentally.’

rack your brains (or brain): try hard to think of something. Example: “I’ve been racking my brains trying to come up with a solution to this problem, but I just can’t think of anything!”

off the rack (US): used to describe clothes that are ready-made, as opposed to custom-made. This is called off the peg in the UK. Example: “In the past, custom-made clothes were the norm among the upper class, but now many people just buy things off the rack.”

A rack is also the triangular frame used to set up pool or snooker balls before starting a game, and to rack up means ‘to put the balls in the rack.’ Rack up also has a figurative sense and means ‘to achieve or earn.’ Example: “The baseball team racked up a string of victories at the beginning of the season.”

Rack is also a variant spelling of wrack, meaning ‘collapse’ or ‘destruction.’ Wrack, or rack, is especially used in the phrase “wrack and ruin,” meaning ‘the downfall of something or somebody.’ Example: “This used to be a successful business, but after the new manager took over, it went to wrack and ruin.”

Rack dates back to the late 13th century, in the form of the Middle English noun rake or rekke, meaning ‘a frame with bars.’ Most linguists think it came into English from the Middle Dutch rec (‘framework,’ but literally ‘something stretched out’), from the verb recken (to stretch out). It can be traced back to the Proto-Germanic root rak– (to stretch out) and the Proto-Indo-European root reg– (to move in a straight line). Rack is related to the Old Saxon rekkian, the Old Frisian reza, the Old Norse rekja, the Old High German recchen, the German recken and the Gothic uf-rakjan (all meaning ‘to stretch out), as well as the Sanskrit raj– (a king or leader), rjyati (he stretches himself) and riag (torture), the Avestan razeyeiti (directs) and raštva– (directed, arranged or straight), the Persian rahst (right or correct), the Latin regere (to rule, direct, lead or govern), rex (king) and rectus (right or correct), the Greek oregein (to reach or extend), the Old Irish ri and Gaelic righ (a king), the Old Irish rigim (to stretch out), the Gothic reiks (a leader) and raihts (straight or right), the Lithuanian raižytis (to stretch yourself), the Old High German recht, Old Swedish reht and Old Norse rettr (correct), as well as many English words, including address, alert, arrogant, correct, direct, dress, erect, ergo, interrogate, rail, rake, rank, real, realm, reckless, rectangle, rectify, rector, regal, regime, region, regulate, reign, rich, right, rule, surge and surrogate. The sense ‘instrument of torture’ dates back to the early 15th century, and possibly came from the German rackbank, an instrument for stretching leather. The meaning ‘framework for displaying clothes’ is from the 1950s.The colloquial US sense ‘pair of breasts’ dates back to the 1990s, but it evolved from another colloquial use, ‘set of antlers,’ from the 1940s. The verb, meaning ‘to stretch out for drying’ as well as ‘to torture on the rack,’ dates back to the early 15th century, and comes from the noun. It extended to include ‘strain or exert in other ways’ by the late 16th century, and the figurative sense ‘to torture’ was first used around the year 1600. To rack up, meaning ‘to register, earn, accumulate or achieve,’ was first used in 1940s slang, and probably evolved from the way the score was kept in pool halls.

See full definition
Learn more about rack in our forums

Rack in other languages