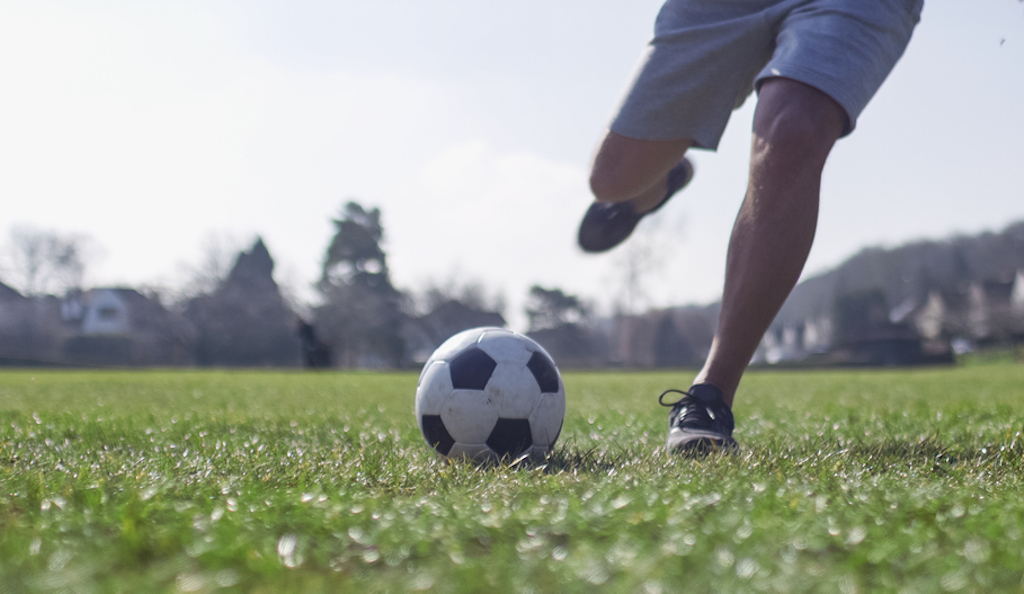 Getting ready to kick a soccer ball

To kick means ‘to hit with the foot’ or ‘to make quick and sudden movements with the feet.’ In American football and rugby, kick also means ‘to score by kicking.’ Informally, with at or against, kick means ‘to resist or rebel against something.’ As a noun, a kick is not only the act of kicking, but also something that excites and gives pleasure. It is also a stimulating quality in an alcoholic drink or drug or spiciness in food.

kick the bucket (colloquial): die. Example: “The old man’s relatives were just waiting for him to kick the bucket so they could get their hands on his money.”

kick your heels: to be kept waiting with nothing to do. Example: “We couldn’t make any progress on the project until we had all the information, so we were just kicking our heels until it arrived.”

kick over the traces (UK): to break free of control. Example: “The government had abused its power for too long and the people finally kicked over the traces and revolted.”

kick around: to wander aimlessly. Example: “Emma’s friends were all away and she spent the day kicking around the park by herself.”

kick something around: to discuss. Example: “We held a meeting to kick around a few ideas about the staff changes.”

kick back: and relax. Example: “Now that all the preparations are finished, we can kick back and relax a bit.”

In US English, if you kick someone’s ass, it means you beat them up or, figuratively, beat them in a contest or game. If you say something is kick-ass, that means it’s very good. These are slang terms and may be considered a little vulgar by some people, but they are widely used. There is a 2010 movie called Kick-Ass about an ordinary guy who decides to become a superhero. You can see the movie trailer here:

Kick can also have the meaning of freeing yourself from an addiction or something similar. Example: “Linda used to be a heavy smoker, but she kicked the habit five years ago and she hasn’t had a cigarette since.”

Kick, meaning ‘to strike with your foot,’ dates back to the late 14th century, as the Middle English verb kikken. but its origin is uncertain. For a long time, linguists thought it could have come from Celtic, but that theory has mostly fallen out of favor, since there’s no evidence for it. Now, some experts think that it may have come into English from a Scandinavian source, such as the Old Norse kikna (to bend backwards or to sink at the knees), though others don’t think there’s enough evidence to support that either. The figurative sense, ‘to resist, object or rebel against something’ has been used since the verb first appeared, but the transitive sense, ‘to give a blow with your foot,’ was not used until the late 16th century. Kick has been used colloquially meaning ‘to die’ (either on its own or in expressions like kick the bucket) since the early 18th century. Kick around is from the mid-19th century, and kick something around (adding the transitive sense) appeared in the late 19th century. Kick back appeared in the mid-20th century, and the slang sense of kick, ‘to end a habit’ (especially drugs) was first used in the 1930s. The noun, meaning ‘a blow with the foot,’ dates back to the early 16th century, and comes from the verb. The meaning ‘a surge of pleasure or excitement’ dates back to the 1940s, and evolved from an earlier sense, ‘stimulation from drugs or alcohol,’ which was first used in the mid-19th century.

See full definition
Learn more about kick in our forums

Kick in other languages