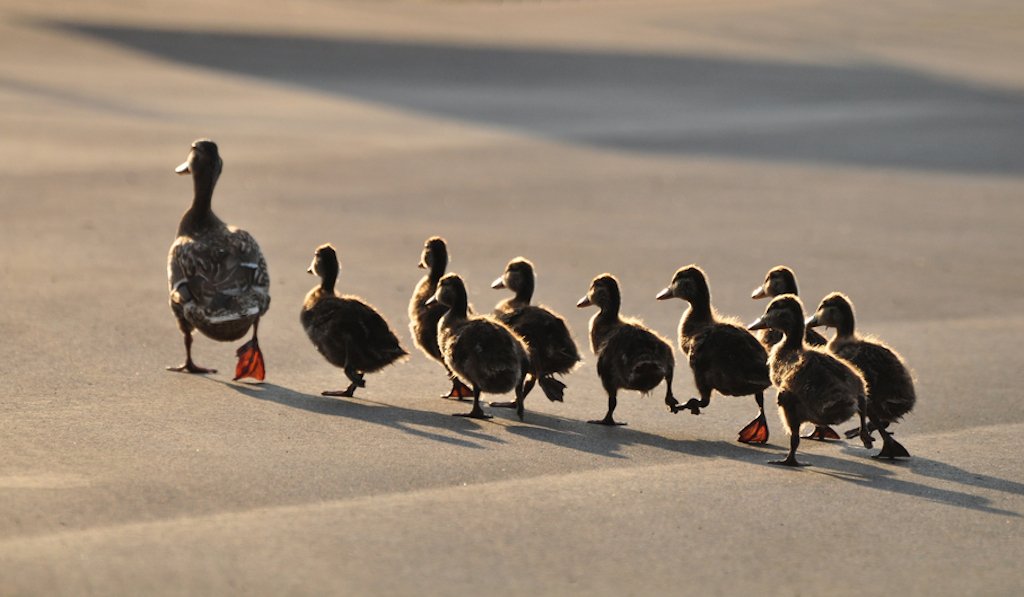 A mother duck and her ducklings

get (or have) all your ducks in a row: to get or be organized. Example: “It’s always good to work with colleagues who have all their ducks in a row.”

duck out: to go out briefly. Example: “I just need to duck out and get some bread. I won’t be long.”

Duck soup is a colloquial expression meaning ‘something easily done,’ and it’s also the title of a 1933 Marx Brothers’ movie, which made the expression popular. You can see the movie trailer here:

Ducking, in the sense of plunging something into water, was also a method used in Medieval times to determine whether or not a woman was a witch. The woman suspected was tied to a ducking stool (a special seat that could be lowered into the water) and ducked into the local pond to see if she drowned. If she did, she was innocent, if not she was a witch (but would be executed anyway!). Ducking stools were also used more generally as a method of punishing women, and the length of time the woman was ducked for depended on the person operating the ducking stool and the crime she was supposed to have committed.

Duck, meaning the bird that swims, dates back to before the year 1000. The Old English dūce (Middle English doke, ducke, dukke, dokke, douke or even duke), literally meant ‘a ducker,’ or ‘something that dives underwater.’ This name replaced ened, the older name for the bird. The new name, dūce, came from the verb ducan or duccan, which meant ‘to dip or dive,’ and can be traced back to the Proto-Germanic ducjanan. This might lead you to believe that the verb duck is older, but while this Old English verb dates back to before the year 900, it disappeared from the records, and only appeared again around the year 1300, as the Middle English dukken, meaning ‘to plunge into (water)’. In fact, the only record we have left of the Old English form of the verb is the noun (dūce), but linguists have found enough similar words in other Germanic languages, such as the such as Old High German tuhhan (to dip), the German tauchen (to dive), the Old Frisian duka and the Middle Dutch duken (to dip or dive) and the Dutch duiken (to dive), to make them pretty sure that the verb did exist in Old English. As for the verb as we know it today, the sense ‘to suddenly go underwater and come right back out’ appeared in the mid-14th century. The meaning ‘to bend down or stoop suddenly’ was first used in the early 16th century. It has been used figuratively since the late 16th century. The noun sense ‘a quick stoop’ appeared in the mid-16th century, while ‘a dip or plunge’ is from the mid-19th century. Both come from the verb. Finally, the expression duck soup, meaning ‘something easily done,’ dates back to the late 19th century.

See full definition
Learn more about duck in our forums

Duck in other languages